Self Catering Holiday Cottages in Richmond

Richmond in North Yorkshire is known as the Gateway to the Yorkshire Dales, but it is so much more than merely a town to pass through on your way to somewhere else. The beautiful riverside community has excellent amenities with lots of pubs, cafes and restaurants, a fantastic choice of cottages to rent, and easy access to some of the most spectacular views in the north. Nestling amongst the beauty of Swaledale, there is always something amazing to see or fun to do regardless of the time of year. Read on to discover just a few of the many reasons Richmond makes the perfect holiday destination. Read more 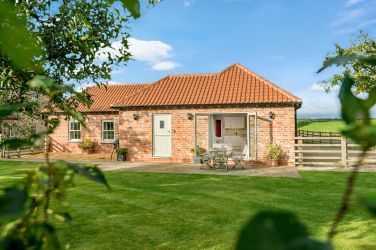 This charming holiday cottage is in a quiet rural location close to Catterick and Richmond. Greendale Lodge sleeps four people in two bedrooms and is popular with couples and families who love the rural views and easy access to favourite sights and attractions, including the North York Moors and the Yorkshire Dales National Parks. You can trust that your stay will be comfortable with all of the facilities you need for a relaxed self-catering holiday. 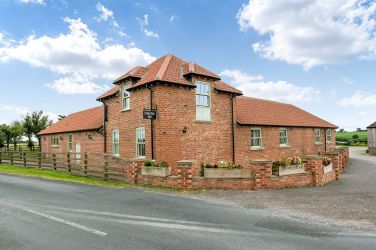 With far-reaching rural views, a quiet location near Catterick, and space for six to eight people to sleep in comfort, Galloway House is a favourite for a self-catering holiday in Yorkshire with families and friends. It is one of three superb holiday cottages on Tunstall Road Farm, within easy reach of Richmond, Harrogate and York. The property is neatly sandwiched between the Yorkshire Dales and North York Moors National Park, making it an excellent choice for a walking holiday in Swaledale and Wensleydale. 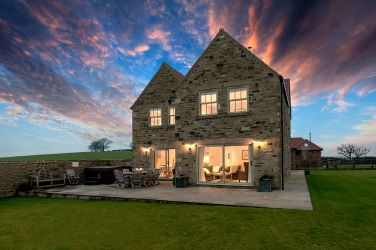 The Farmhouse elevates a self-catering holiday with family or friends in Yorkshire to the next level. It sleeps eight people in four bedrooms, with a sofa bed in the snug sleeping two more. The holiday home is child-friendly, pet-friendly, and accessible to guests who use a wheelchair, so no one needs to miss out on the many delights in this region. You're right between the North York Moors and the Yorkshire Dales National Park and within a few miles of Richmond, York, and Harrogate. 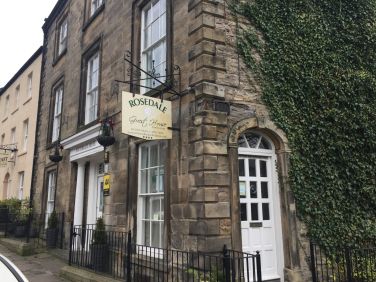 Sleeping up to 14 guests in seven en-suite bedrooms, Rosedale House is an excellent choice for large groups of friends or family who want to spend time together or celebrate a special occasion. It is equally appealing to big groups or walkers and outdoor enthusiasts wanting a comfortable place to return to after exploring the Yorkshire Dales. Elegantly furnished to provide modern day conveniences with lots of Georgian charm, this substantial holiday home is just a two-minute stroll from Richmond's historic town centre with shops, pubs, restaurants and attractions close to hand.

One of an impressive collection of luxury award-winning holiday homes ideally position on the outskirts of Richmond - the gateway to the Yorkshire Dales National Park. If you are looking for a little luxury whilst on holiday, with the convenience of amenities and places for a meal out within walking distance, then this stylish lodge is likely to be a perfect choice. Lovely walks and cycle routes from the front door and a wealth of attractions within easy reach. 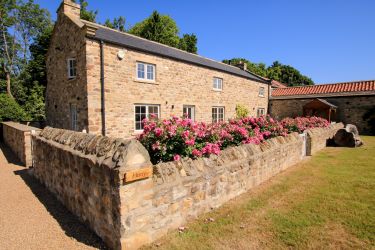 Presented to the highest of standards in self-catering, this fantastic luxury holiday home is located just one mile from the bustling historic market town of Richmond on the edge of the Yorkshire Dales National Park. A tranquil setting which is ideal for walkers and discerning travellers within easy reach of the many pubs, shops and restaurants of Richmond. 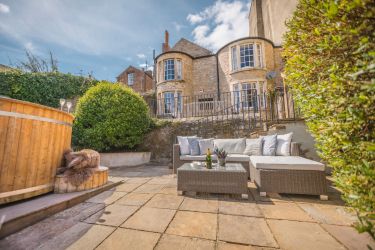 A luxurious Georgian town house in a highly desirable cobbled residential area of the historic market town of Richmond on the edge of the Yorkshire Dales National park. Sleeping ten guests in five beautifully presented bedrooms and with a hot tub in the garden, this is a perfect luxury venue for celebrating a special occasion or enjoying a break away with friends or family. 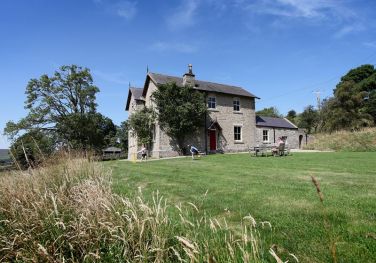 Treat your family to a holiday in the beautiful Yorkshire Dales that they will remember for a lifetime. The Old Vicarage is a gorgeous early-Victorian property that sleeps 9 people (10 by arrangement) in five bedrooms. Original features and antique furnishings are brought into the 21st Century with the addition of a high-quality entertainment system, WiFi and a 15-metre indoor swimming pool with a Jacuzzi, sauna and steam room. Guests have plenty of space both indoors and out, with direct access to the River Swale and stunning views from every window. The owners have worked hard to create a space that is both welcoming and luxurious, earning a 5-Star Gold Award from Visit England. Tourist board rating: 5 Star Gold 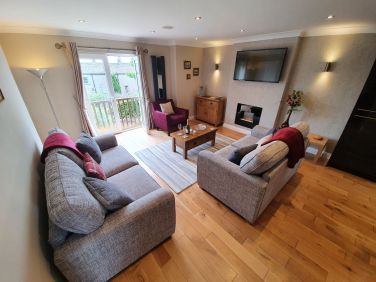 Stay in the desirable Pottergate area of Richmond in this gorgeous Yorkshire self-catering holiday home. The first-floor, two-bedroom apartment sleeps four people and is furnished to a very high standard. A comfortable sofa bed can sleep one or two more people, making the apartment well-suited to couples or families. Shops, cafes, bars and restaurants are all within a five-minute walk. Stroll beside the river to Easby Abbey or tackle the footpaths and mountain bike trails of the spectacular Yorkshire Dales, which are on the doorstep. Garden View has allocated off-street parking and is available for bookings all year round. 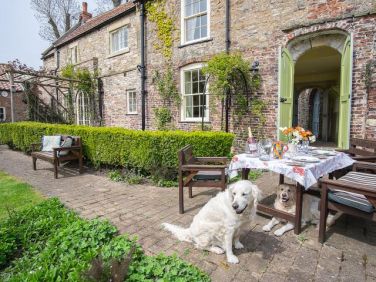 Richmond is a vibrant market town on the River Swale, surrounded by stunning meadows, moorland, fells and farmland, with miles of footpaths and cycleways to explore - just the place for a fun holiday with family or friends. However, no matter how impressive the location, if the holiday cottage isn't up to standard then your holiday will be a disappointment. Garden Cottage delivers on every level! With space for up to six people in three bedrooms and an enormous south-facing garden, it is decorated to a high standard and enjoys beautiful views of Richmond Castle and the surrounding countryside. The cottage is just a short stroll to the shops, restaurants, sites and amenities of Richmond, and within easy reach of the best of Swaledale and Wensleydale. Tourist board rating: 4 Star Gold 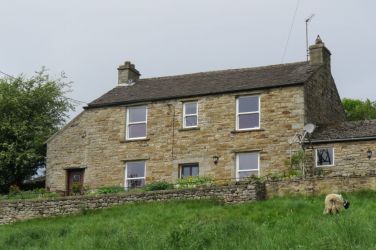 A delightful three bedroom traditional holiday cottage with two bathrooms and a fantastic first floor sitting room for enjoying wonderful views over the dale. Set in the Yorkshire village of Low Row with gastro pub in walking distance, Hillcrest is a perfect retreat for exploring the Yorkshire Dales National Park, relaxing and enjoying the many miles of wonderful walking the area offers. 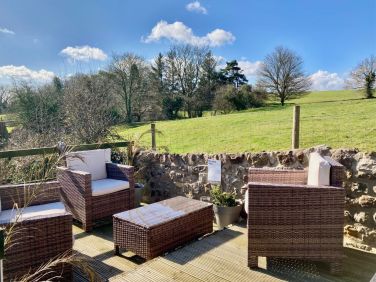 The views from Moulton View have to be seen to be believed. The semi-detached cottage is in the quiet village of Moulton, overlooking fields and dales from the house and the garden. It sleeps four people in two bedrooms and is furnished to suit couples, families or friends. The cottage is dog-friendly, as is The Black Bull pub, just five minutes down the road. Richmond is within a short drive, and you can reach fantastic footpaths and cycling routes from the door. 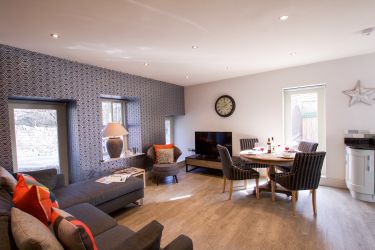 Five stylish luxury apartments in an enviable position with views over the River Swale in the ancient Yorkshire market town of Richmond. Sitting on the edge of the Yorkshire Dales National Park, guests have everything on the doorstep (including places for a meal out) and an abundance of attractions and fabulous walks. 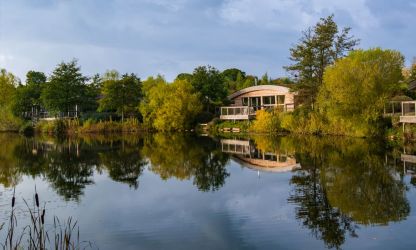 A collection of unique luxury holiday lodges with panoramic views over the lake, situated just two miles from the Yorkshire market town of Richmond. An ideal place for the discerning traveller whether you are looking for a family holiday, a catch-up with friends or a romantic break away amongst beautiful North Yorkshire countryside. Sitting on the edge of the Yorkshire Dales, there are a multitude of attractions within easy reach and lots of opportunities for walkers.

Popular towns in and around Yorkshire:

The scenery in the Yorkshire Dales is breathtaking, and the lure of experiencing it up close and personal is irresistible. Richmond has more than its fair share of beauty including the ruins of the magnificent Richmond Castle. Walk along lanes with names like Friar’s Wynd that show their age, and you will see picturesque sights like the Franciscan Friary belltower, medieval gateways, a cobbled market square and public gardens with colourful flowers and shady trees. Richmond sits beside the River Swale, and a walk beside the river to Richmond Falls or Hudswell Woods is a lovely way to spend an hour.

Outside of town, the landscape opens up into miles of wilderness. The Yorkshire Dales National Park and the North Pennines Area of Outstanding Natural Beauty (AONB) are both close by, as is the North York Moors National Park. The long-distance Richmond Way footpath starts just below the castle’s Great Keep, stretching to Lancaster Castle. Wainwright’s Coast to Coast footpath also passes through the town. Those keen for a challenge could even take on Yorkshire’s Three Peaks. Nearby beauty spots include Aysgarth Falls, the Swaledale Valley, villages and towns like Reeth, Bedale and Middleham, and landmarks that include Easby Abbey.

Cyclists also have a fantastic choice in a landscape that is a favourite with cyclists of all disciplines. The opening stage of the 2014 Tour de France passed close by, making the most of tough climbs and swift downhills, while the Dales Bike Centre has a variety of off-road trails and bike hire. Other outdoor activities where visitors can immerse themselves in the beautiful landscape include fishing, golf, climbing, abseiling and gorge walking, with local companies like Alfresco Adventures organising guided activities.

Richmond has long been a favourite place in the north. The earliest “visitors” were the Romans, followed several centuries later by the Normans, who built the magnificent castle and keep on the hill above the town. Anglo-Saxons, Danes and Vikings have all spent time here too. Richmond thrived, and in 1441 Henry IV granted the town a market charter which made it even more popular for a medieval day out. Georgian prosperity has helped shape the facade of the town’s architecture and the addition of the cobbled marketplace, which is one of the biggest in England. You can find your way to the centre of town by looking up and searching for the spire of the Church of the Holy Trinity and the obelisk.

Stop by the Richmondshire Museum to find out more about the history of the people in the area. Richmond Castle is splendid, notably the Great Hall, and is one of the best examples of Norman building in England. Henry VII inherited the title of the Earl of Richmond when he was born and renamed his home in the south, Shene Palace in Surrey, in honour of this. Although there are many places named Richmond around the world, including three in the UK, Yorkshire’s Richmond is the father of them all.

Richmond is full of places to eat, drink and shop. In addition to the Saturday market, there are clothing, food and homewares shops. Richmond also has several galleries where visitors can admire local artists, while The Station combines all three pastimes with a gallery, shops and a restaurant. Visitors to Richmond can take in a show at the Georgian Theatre Royal, try their luck on the horses at Catterick Racecourse, and take a peaceful stroll around the Foxglove Covert Nature Reserve.

Nearby attractions include Jervaleux Abbey, Barnard Castle, and a brewery tour at The Black Sheep Brewery in Masham. Thirsk is a lovely place for a day out, as is Ripon.

Richmond is a beautiful holiday destination for all ages and all seasons. As with many places in the north of England, the weather is predictable only in its unpredictability, so pack suncream and wellies and you won't go wrong.