If you like great food, spectacular scenery, or are simply after a holiday in a friendly atmosphere, visit Askrigg. The picturesque village is nestled amongst lush pastures, with swathes of open common to the north and charming villages to the south. It’s easily accessible via car (the A684 runs nearby), or by train to nearby Garsdale, Dent, or Ribblehead. The popular BBC series "All Creatures Great and Small" brought the beauty of Askrigg to the attention of fans worldwide and it remains relatively unchanged to this day. Traditional shops, independent cafes, and welcoming pubs sit comfortably in the landscape which is home to the producers of some of Britain’s best cheese: Wensleysdale. Read more

Minnie's Cottage is a charming Grade II listed holiday home with stunning views across Wensleydale and only a two minute walk from the restaurants, pubs and shops in the Yorkshire village of Askrigg. The perfect place for a relaxing holiday within the Yorkshire Dales. Tourist board rating: 4 Star Gold

Urlay Nook is a luxurious 5 Star Gold holiday retreat in the pretty Yorkshire village of Askrigg, famed for being the primary film location for All Creatures Great and Small. With a south facing garden and views to the meadows beyond, and the village amenities closeby, Urlay Nook is perfect for walking and exploring the Yorkshire Dales. Tourist board rating: 5 Star Gold 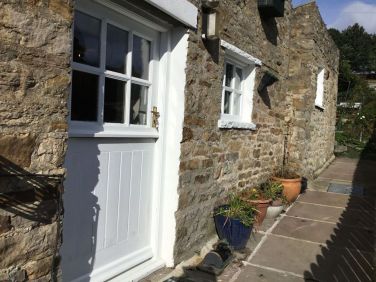 This lovely stone self-contained holiday cottage is in the pretty Dales village of Askrigg, within walking distance of three pubs, a tea room and a deli. It sleeps three people in one large bedroom, with accommodation ideally suited to individuals, couples or small families, including those with a dog. Askrigg is convenient for Richmond, Sedbergh, Kendal and the southern Lake District, making it a perfect destination for a walking or cycling holiday. Hawes is four miles away, and there are beautiful walks from the village into the surrounding landscape.

This charming cottage in the Yorkshire Dales National Park is close to the famous Dales Way footpath and within a short walk of the village shop and pub. The two-bedroom cottage can sleep up to four people and is ideal for couples, friends and family, including those with dogs. It is in the quiet village of Buckden in the Upper Wharfdale Valley, about half an hour's drive from Skipton and within easy reach of the Forest of Bowland and Nidderdale, both designated as Areas of Outstanding Natural Beauty, as well as Grassington and Aysgarth Falls.

Cosy and welcoming, this Dales cottage sits in a picturesque setting in the little hamlet of Worton close to Askrigg, and also within easy reach of Hawes in beautiful Wensleydale in the Yorkshire Dales. Spend your days walking or exploring the many attractions of the national park then return home and relax in the hot tub on the terrace. With fabulous views and a multi-fuel stove, Stoney-end Cottage is an excellent self-catering choice all year round. Tourist board rating: 4 Star

Nesting in the heart of the Yorkshire Dales in the popular picturesque village of Askrigg (famed for being the filmset for All Creatures Great and Small), this cosy holiday cottage is a superb self-catering base for walkers and those wanting to explore the Yorkshire Dales National Park. Stunning scenery, fantastic walks from the front door and a choice of pubs and shops on the doorstep.

Popular towns in and around The Yorkshire Dales:

Askrigg isn't just for shopping and eating, it's a fantastic base for exploring the surrounding countryside. Cyclists, mountain bikers, horse riders, and ramblers flock to the area for the challenging trails and spectacular views; while cavers come for what’s underneath at places like Ingleborough Cave and White Scar Cave.

Families will find more than enough to keep them occupied with museums, castles, stately homes, and lots of outdoor areas to explore. Askrigg has been a settlement since as far back as the Iron Age, though it was the Vikings who named it. It reached its peak during the Industrial Revolution, clothing the country with cloth and textiles produced in its factories.

Its central location in the heart of the Yorkshire Dales makes Askrigg the ideal base for a self-catering holiday regardless of whether your perfect holiday involves muddy boots, delving into history, discovering local delicacies, or all of the above.