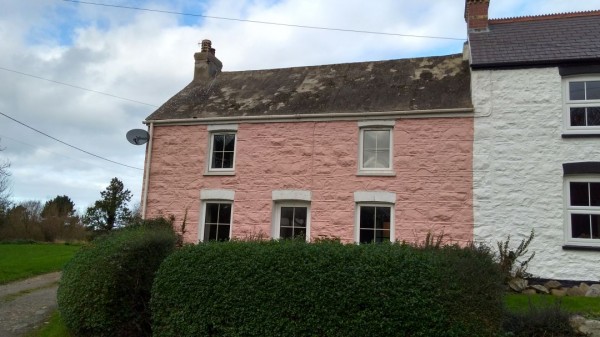 Llanffynnon is a traditional Welsh stone cottage in the peaceful Pembrokeshire hamlet of St. Nicholas, close to some of west Wales’ most beautiful beaches. The cottage sleeps four guests in two bedrooms and is a favourite with couples and families who appreciate original features like thick stone walls, exposed beams, and a private garden front and back; as well as its proximity to Strumble Head, Goodwick Sands and Fishguard.

Pembrokeshire is a fantastic choice for a relaxing holiday. Although there are plenty of shops, cafes, pubs and restaurants to keep you happily distracted, these come second to the stunning landscape that is protected as a national park. The countryside is gentle, with rolling hills lush with green, while the coast is a mixture of dramatic rocky outcrops and golden sandy shores. There is nowhere better for sloughing off the tension and stress of the daily grind whether you walk a few miles along the Pembrokeshire Coast Path, dip your toes in the clean ocean waters, or fill your body with adrenaline on an exciting coasteering adventure. The coastal shuttle bus (which stops in the village) provides a hop-on, hop-off service allowing walkers to explore further afield without having to use the car.

One of the best ways to experience the great beauty of Pembrokeshire is in a comfortable pair of shoes. Pack a picnic, grab some binoculars and free yourself of any agenda or expectations. Let the day take you where it will. Red Kite, Peregrine falcons and Chough are regularly spotted around here, and there is a thriving colony of puffins on Skomer Island. Strumble Head is one of the best places to witness the Manx Shearwater, dolphins, porpoises and seals who flourish in the clean waters off the coast.

Although the landscape has changed significantly over the centuries, there is a strong sense of permanence, as if you are leaving footprints in a much larger history. Rhos y Clergyn moor, just outside of St Nicholas, has a large standing stone and evidence of several prehistoric stone circles and a burial mound, while it is believed that the village church itself has been a site of worship and pilgrimage since the 5th Century. More recently, Fishguard was a Viking trading post and, in 1797, the site of the last invasion of Britain. You can see a stunning 30-metre long tapestry commemorating this event and the women who defeated the invading French, in Fishguard Town Hall.

As well as having lots to do in the immediate vicinity, Llanffynnon is just ten minutes from Fishguard and a twenty minute drive from both St David’s, the smallest city in Britain with a wonderful cathedral and fascinating history, and Haverfordwest. Pembroke Castle, the birthplace of Henry VII and the Tudor dynasty, and Cardigan Castle are both less than an hour’s drive, so there is no shortage of things to do and places to visit on your Pembrokeshire holiday.

Llanffynnon is a picture-perfect Welsh cottage, with thick stone walls colour-washed in the traditional style, and a white picket fence to welcome you in. Perfectly placed, it sits alongside the village green and common land (National Trust owned) and is simply but comfortably furnished with pieces chosen to fit with the age of the property, allowing guests to relax.

Outside: Llanffynnon has a private garden at the rear of the property laid mainly to lawn with a patio area which provides a sun trap almost all year round, as well as a small front garden. It is the perfect spot to enjoy a relaxing drink as you look across open countryside (towards the sea). The old dairy attached to the cottage provides storage space for the washing machine and tumble drier.

Additional Information: The cottage has electric storage heaters, and all utilities and bed linen are provided. One dog accepted by prior arrangement - please enquire if you would like to bring more than one dog. Short breaks may be possible depending on availability. No smoking.

Booking Conditions:
Please refer to the owner for accessibility requirements, booking terms / conditions and cancellation policy.
Help combat online fraud. Speak to the owner on our officially verified number: +44(0)1223 237819 before paying by bank transfer.
Please discuss any requirements regarding your pet(s) with the property owner.
Independent Cottages recommends that you take out holiday cancellation insurance.

Other popular towns / villages in Pembrokeshire