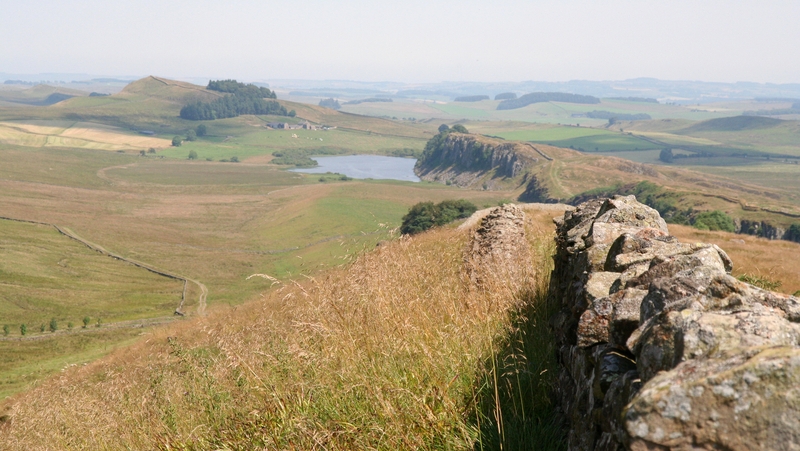 Hadrian’s Wall in the Northumberland National Park – one of the UK’s most iconic landmarks.

The British Isles are home to no less than 15 National Parks. From the Cairngorms National Park in North Scotland, to Dartmoor National Park in England’s South West, there are thousands of acres of unspoiled landscape for you to enjoy amazing British holidays.

The Cairngorms – perfect for outdoor adventures

The Cairngorms National Park is for adventure lovers. It’s home to Britain’s highest peak, Ben Nevis and covers over 4,500 square kilometres across Moray, Aberdeenshire, Angus, the Scottish Highlands, and Perth and Kinross. Despite its size (it’s the largest national park in Britain) it was only formally established in 2003.

Scotland’s other national park is Loch Lomond and Trossachs. Its abundance of superb produce led 2015 to be declared as the Year of Food and Drink. The loch is a focal point of the national park and there are no shortage of water activities, including the annual Great Scottish Swim on the last Saturday in August, which attracts more than 2,500 participants. With scenic drives, romantic ruins, and enough fresh air to fill your lungs for a lifetime, Loch Lomond and the Trossachs National Park is total bliss. 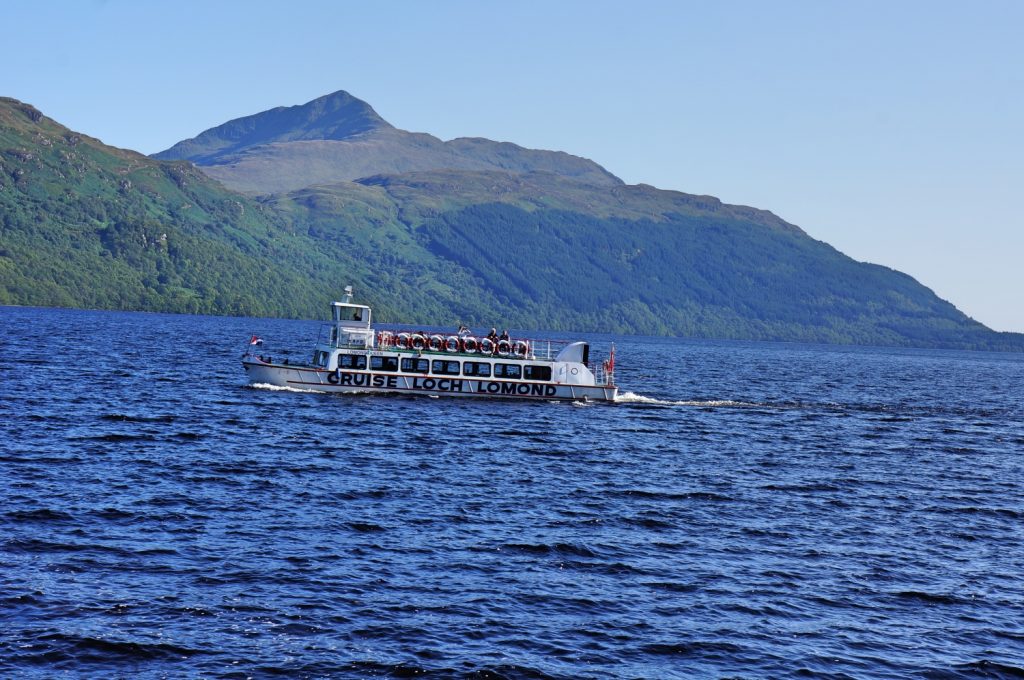 England’s most northern national park is Northumberland National Park. It incorporates the Cheviot Hills, Coquetdale, North Tyne and Redesdale, but arguably its most compelling feature is Hadrian’s Wall, which stretches for 120 kilometres from Wallsend to the Solway Firth, dividing Roman Britannia from the independent north. Now a World Heritage Site, Hadrian’s Wall continues to inspire awe and wonder nearly two thousand years after its construction. With rolling hills and dales, Europe’s largest man made lake (Kielder Water), sparkling rivers and vast open skies that are as magical by day as they are by night, it’s hardly surprising Northumberland’s National Park is one of the most tranquil spots in the country. 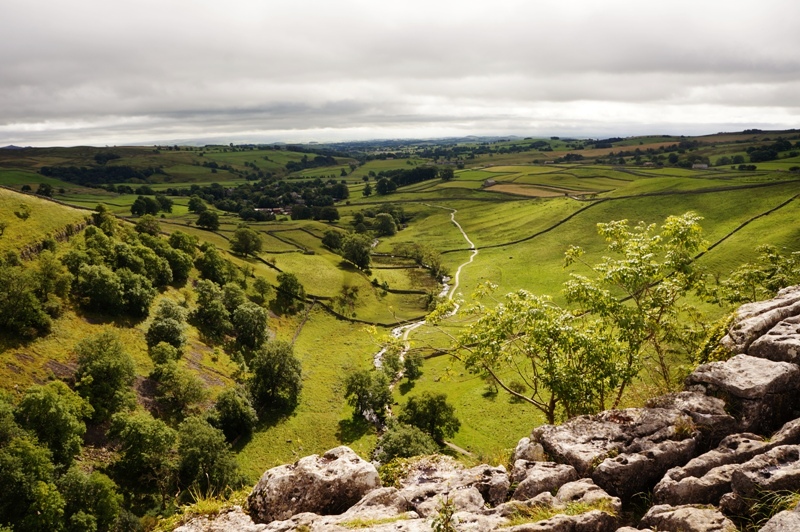 Moving south you will encounter the North York Moors and Yorkshire Dales National Parks. The former includes not only wild and mysterious moorland, but ancient woodland, beautiful coast and a fingerprint of civilisation that stretches back to the Iron Age and beyond. The North York Moors is especially good for bird watchers who can see the endangered Merlin, along with Lapwings, Skylarks, Curlews, and Snipe, among other species.

The Lake District is simply incredible in the Autumn

The Lake District National Park attracts nearly 16.5 million visitors each year! From hardened hikers to families wanting to visit the many attractions, the Lakes is the UK’s most visited national park and one that claims fame for having both England’s deepest (Wastwater) and longest (Windermere) lake, as well as its highest mountain (Scafell Pike).  As well as coming to walk, cycle and climb in a beautiful environment, visitors come to enjoy peace and serenity and some of the country’s finest scenery. You can be as active or lazy as you like in the Lake District, seeing the sights from the comfort of a boat or steam train, the back of a horse, or the top of a fell. Don’t let the rumours of rain put you off visiting the Lakes, a drop of drizzle adds to the lush beauty and a rainy day transforms an already stunning landscape into one which comes alive by cascading water falls (if you’re visiting the Lakes and want some wet weather activities up your sleeve, take a look at our rainy day suggestions). 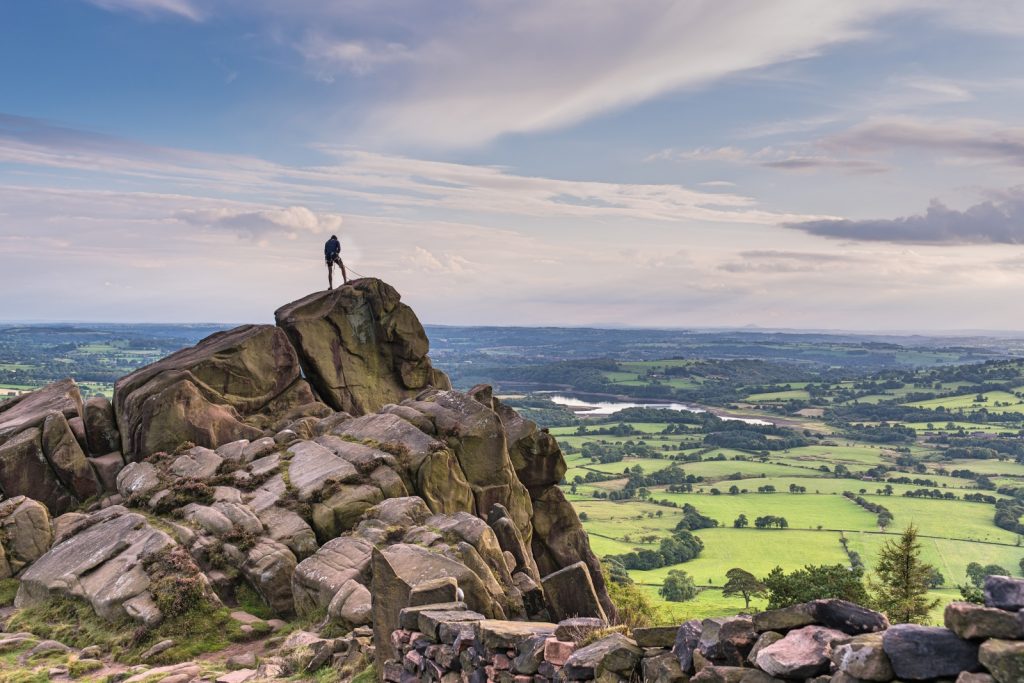 One of the UK’s most visited national parks

South of the Lake District is the Peak District (read about things to do in the Peak District) which is jam packed with top attractions. At its centre, Bakewell is arguably one of the prettiest towns in England, with warm stone buildings and glorious countryside. There is virtually  a cake shop on every corner giving you no reason not to try the local speciality, the Bakewell Tart, while you’re there. Chatsworth House and grounds is also worth a visit, especially if you are in the Peak District at Christmas time.

The Norfolk Broads is the largest area of protected wetlands in Britain and home to rare flora, fauna and an abundance of wildlife. Sail, canoe and fish to your heart’s content. If you prefer your holiday on dry land, you can cycle, walk, shop, eat and watch the world drift past in a lazy haze of relaxation. Easily accessible from London, the Norfolk Broads is a popular destination for a weekend break and particularly beautiful in the spring when the waterways come to life with newly hatched chicks. 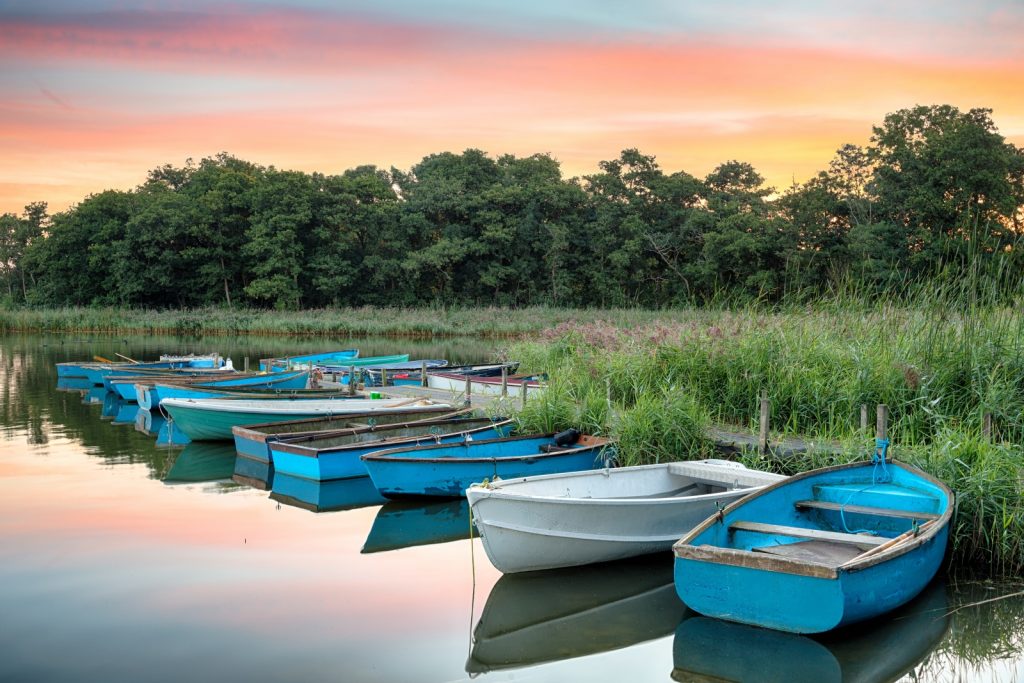 The magical waterways of the Norfolk Broads – a boaters paradise

Within easy reach of London, the South Downs are a fresh antidote to city life. A holiday here could consist of a walk through stunning woodland, lunch in a market town, or simply enjoying the view and letting the gentle peace seduce your soul. The South Downs covers a huge expanse from Winchester in Hampshire to Eastbourne in East Sussex.

Not far from the western edge of the South Downs, the New Forest National Park is a fantastic destination whether you only have a few days to spare, or you want to get far away from daily life for a week or more. There are an abundance of attractions to visit in and around the forest and hundreds of miles of walking, cycling and bridle trails taking you through what was once William the Conqueror’s hunting grounds, and along spectacular coastline. Whether you visit in the spring when the wooded floors are carpeted in bluebells; during the summer to see the newborn foals or in Autumn when the trees are ablaze with colour, the magic of the New Forest is sure to captivate you. 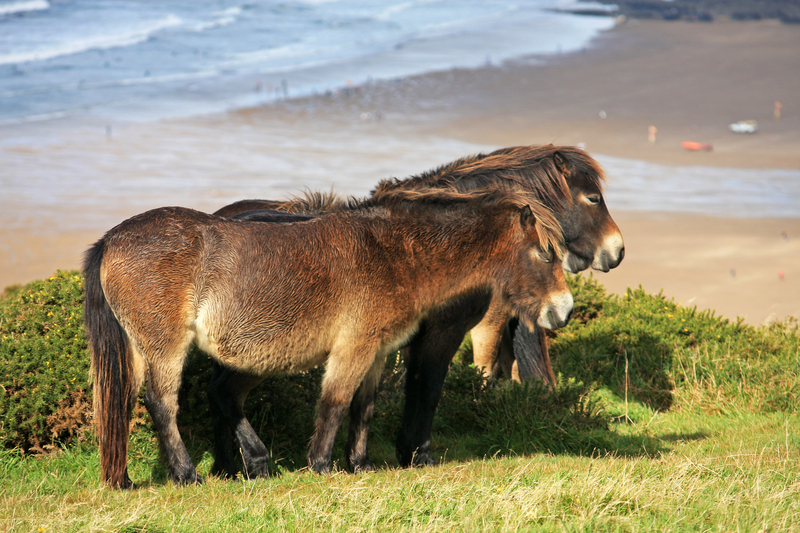 Exmoor ponies snoozing in the sun – what better place to relax!

The remaining two national parks in England are two of the smallest and the earliest. Dartmoor National Park was designated in 1951. It may only be 953 square kilometres large but it includes 1,208 scheduled ancient monuments, making it a great place for history buffs. A stunning landscape encapsulated in folklore and peppered with picture post-card villages (including a great choice of accommodation), this working landscape offers all the right holiday ingredients in a small package. Neighbouring Exmoor National Park’s landscape is as unique as it is breathtaking, including amazing coastal woodlands, pretty villages, craggy tors and plenty of attractions. 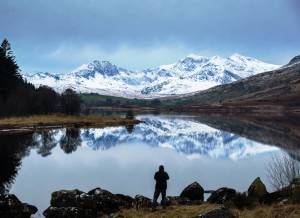 Snowdon in all its glory

The Brecon Beacons was designated as a national park in 1957. A World Heritage Site (Blaenavon), 268 scheduled ancient monuments and one of only five Dark Sky Reserves in the world puts a visit here firmly on your bucket list. It hosts several of Britain’s best festivals including the Hay Literary Festival in May and the Abergavenny Food Festival in September. 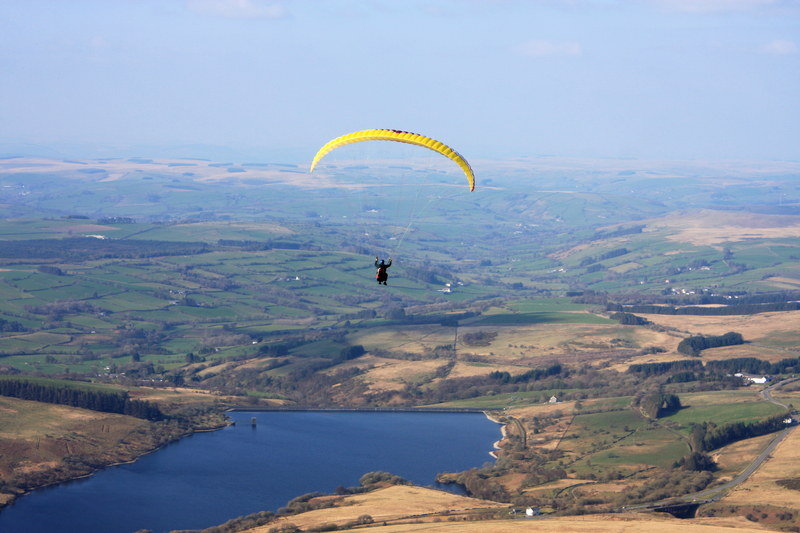 The Pembrokeshire Coast is a paradise for walkers, wildlife enthusiasts,surfers and all round lovers of natural beauty. Coasteering was born in Pembrokeshire. If you feel like putting on a wetsuit and throwing yourself off a cliff into the ocean, or a wildlife adventure paddling around the coast, there’s no better place to do it! Lush farmland means local produce is particularly succulent and tasty. Even if you’re on a cottage holiday in Pembrokeshire, it’s worth eating in one of the many local cafes, restaurants, or pubs around St Davids, Saundersfoot and Tenby. 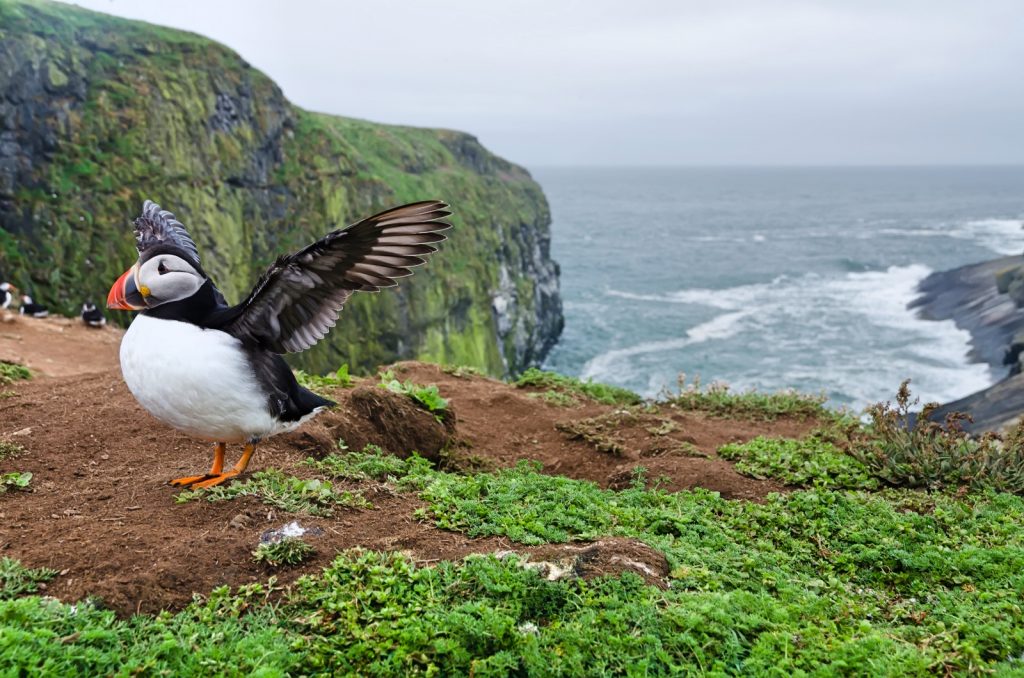 You’re seriously short-changing yourself if you visit Britain without taking in at least one of these magnificent national parks. It doesn’t matter how old you are, whether you’re travelling on your own or with a group, or if you like mountains, coast, moorland, or cliffs, they offer the perfect way to get back to nature.