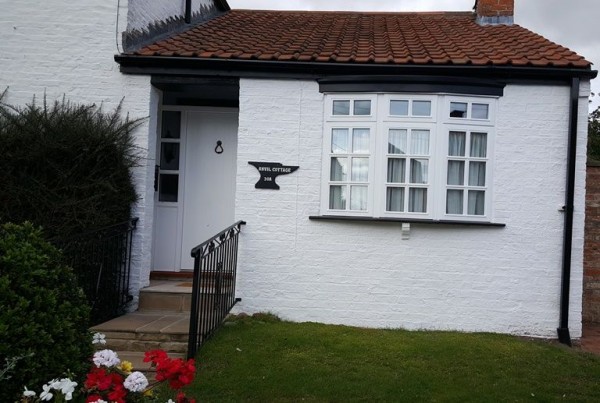 Anvil Cottage is a sweet, one-bedroom cottage in a quiet location in the village of Dunnington, only a few miles from York and within walking distance of the Cross Keys pub. It’s the perfect couple’s retreat being close to York’s historic sights yet also within easy reach of the Howardian Hills Area of Outstanding Natural Beauty (AONB) and the North York Moors National Park.

Dunnington is an excellent choice for visitors to York, especially those who want to see what is outside of the city walls. It has a friendly community, shops, a pharmacy and other local businesses. There is a small supermarket close to the cottage, with further choice a short drive away. It’s possible to drive to York in about 25 minutes, and those who want to avoid city traffic and parking can make good use of the number 10 bus that leaves from the post office every half an hour.

York is a place that everyone should see at least once in their lifetime. It is a beautiful city, filled with attractions that range from ancient monuments to modern shopping centres. York, or Eboracum as the Romans called it, was once one of the most important military and economic centres in Britain. An excellent place to start your day is at the Yorkshire Museum, followed by a few hours examining the beautiful detail in York Minster. After a reviving lunch, take a guided walking tour (or a ghost tour) of some of the city’s most exciting sights or meander along the city walls or through the medieval Shambles which feels as if it inspired Diagon Alley in the Harry Potter stories.

Attractions close to Anvil Cottage include York Maze, the Yorkshire Air Museum, Castle Howard, and the National Railway Museum. Romans aren’t the only invading civilisation to have left their mark on the area. The Vikings pillaged, plundered and later settled happily in the area, and you can find out more about the rule of King Eric Bloodaxe and his predecessors at the Jorvik Viking Centre. The countryside around Dunnington is beautiful, and there are lots of parks and gardens to enjoy, including the award-winning York Lavender Farm.

Outside of the city, the coast and countryside beckon. Walk for miles under Yorkshire skies, climbing mountains, navigating moorland and enjoying the freshness of a salty sea breeze. Whether you are travelling on your own or together with a partner or friend, Anvil Cottage is a welcoming place to stay.

Anvil Cottage is a semi-detached property with a private courtyard and accommodation all on one level.

Outside: There is a walled private patio for relaxing in the sunshine. Off-road parking available if required by arrangement with the owner.

Additional information: Flexible changeover offered. Short breaks available with a two-night minimum all year round. Bed linen and bath towels are included. Pets and smoking are not permitted.