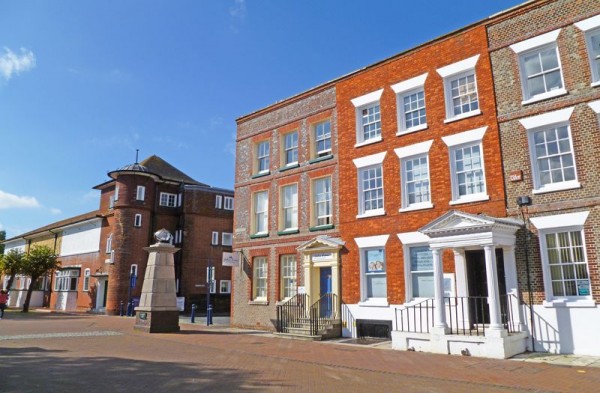 The Georgian Apartment is a dazzling reminder of Gosport's time as vital in supporting the strength of the Royal navy. The apartment is spread over two floors of a Grade-II listed townhouse, complete with original features and sympathetic updates that give it a timeless style that appeals to couples, families or friends. Two bedrooms comfortably sleep up to four people plus one or two cube futon beds can be provided if requested to accommodate two further guests if required. Gosport's marina, shops, cafes and pubs are all within walking distance, as are many of the attractions that make it a favourite year-round holiday destination.

Gosport may not be as well-known in naval circles as neighbouring Portsmouth, but this vibrant town should never be overlooked. Begin your orientation along the two-mile Waterfront Trail that stretches along the harbour between HMS Alliance and the Royal Navy Submarine museum to Explosion! Museum of Naval Firepower and you will pass no fewer than three forts (Blockhouse, Monckton and Gilkicker). For more than 300 years, Gosport provided essential accommodation to naval staff and their families. It was also the Naval Training School site and Royal Navy pilots were trained two miles west of Gosport at HMS Daedelus in Lee-on-Solent. If that's not enough to whet your appetite for naval history, pop over to Portsmouth Historic Dockyard where you can see Lord Nelson's magnificent flagship, the HMS Victory, as well as the remains of Henry VIII's beloved Mary Rose.

There is more here than merely hundreds of years of naval history. Gosport's location at the mouth of Portsmouth Harbour and overlooking The Solent means there is a wealth of opportunity to go sailing, jet-skiing, paddleboarding or kayaking. For a small town, it has a surprising number of marinas and sitting and watching the boats sail in and out of the harbour is a soothing way to spend a peaceful hour or two. The ferry from Gosport takes a mere four minutes to reach Gunwharf Quay in Portsmouth. It runs every 15 minutes with return journeys continuing until the early hours of the morning. You can be in Portsmouth in just a few minutes for shopping, sightseeing, dinner, theatre and clubbing.

Day trips can include exploring the New Forest National Park in a car, on a bike, by foot or on horseback, as the northeast border is less than an hour's drive from Gosport. Stokes Bay and Lee-on-Solent beaches are always good choices, or take the car and passenger ferry to the Isle of Wight for even more beautiful coastline. Winchester and Southampton are also within reach, as is Paulton Park and Peppa Pig World, and the National Motor Museum.

Whether you want an active holiday with friends filled with sailing, cycling and long coastal walks, a proper bucket-and-spade seaside holiday with the kids, or a romantic break with shopping and sightseeing, you'll love the welcoming home-away-from-home atmosphere of The Georgian Apartment.

The Georgian Apartment spans two floors of a period townhouse in Gosport.

Additional Information: Utilities, WiFI, bedlinen and bath towels are provided. Well behaved pets are welcome and there is a park just two minutes away. The apartment has allocated parking for two cars. A cot (no bedding) and highchair are available. Short breaks are possible all year round. Smoking is not permitted.

Booking Conditions:
Please refer to the owner for accessibility requirements, booking terms / conditions and cancellation policy.
Please discuss any requirements regarding your pet(s) with the property owner.
Independent Cottages recommends that you take out holiday cancellation insurance.