The South West of England is pretty much perfect. Here you'll find world class food, pristine beaches, history dating back hundreds of thousands of years and incredible views. England's south west has something for everyone whether you are travelling on a shoestring budget with your kids and your dog, or pushing the boat out for a special celebration. It's the home of the cream tea, the birthplace of King Arthur, and the UK's premier holiday destination.

Know where you want to go in South West England? Follow these quick links:
DartmoorExmoorCornwallDevonDorsetSomersetWiltshire 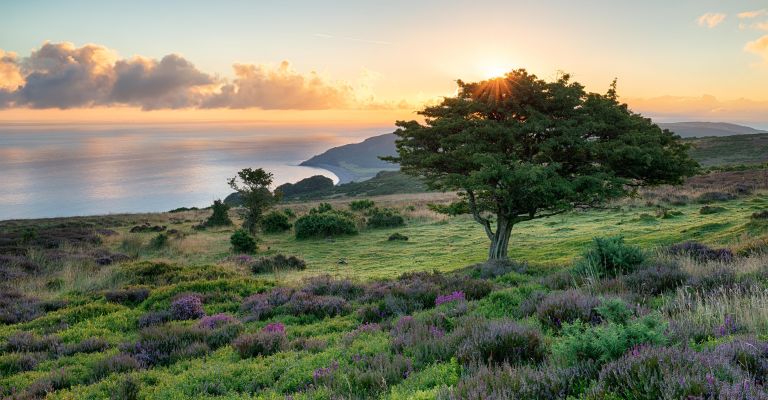 There is nothing half-hearted about Exmoor. It has more than 1,000 miles of footpaths providing walks ranging from a gentle stroll to a challenging hike yet all with incredible views. The clear skies make the national park the perfect place for stargazing, while 37 miles of coast offers a fantastic choice of beaches for swimming, poking about in rock pools, and exploring the rare and beautiful stretch of coastal woodland. On top of this, there is a fantastic array of vibrant towns and villages, each with its own unique charm and identity.

It's a shame to stay indoors with so much to explore. A walk through The Valley of the Rocks is not for the faint-hearted, but worthwhile for the breathtaking views, walk or cycle through the Quantock Hills or take in a stretch of the South West Coast Park, packing a picnic or stopping off for lunch in a local pub or cafe. Minehead and Combe Martin Beach are favourites with families for their good amenities and sheltered sandy beaches, while Kilve is excellent for finding fossils, and Porlock Beach and Weir are just lovely. There are farms and markets, historic buildings and ancient monuments, country pubs and cafes serving homemade cake and all within easy access of the M5. It's no wonder Exmoor is a place happy holiday makers return to year after year.

View all holiday cottages to rent in Exmoor 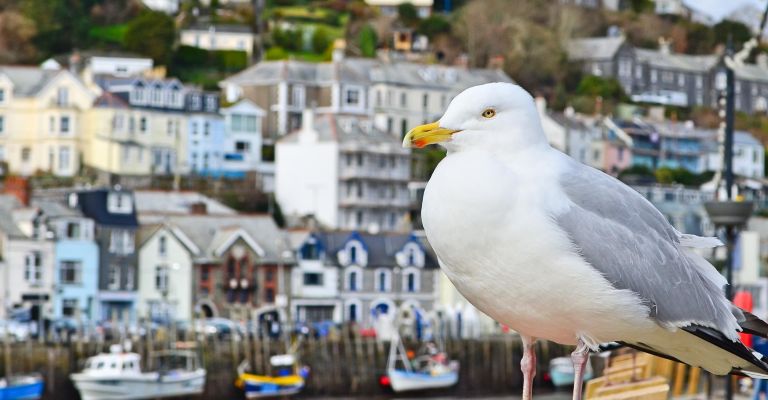 Cornwall boasts Britain's longest coastline, which means that even though more than five million holidaymakers visit every year, there is ample space in the 433 miles to spread out your towel and unpack your picnic. People may visit for the beaches, but soon discover that there is so much more to enjoy. As Cornwall is so large it's often divided into north Cornwall, south Cornwall and west Cornwall. If you are torn between the different parts of Cornwall, read on to find out more.

View all holiday cottages to rent in Cornwall 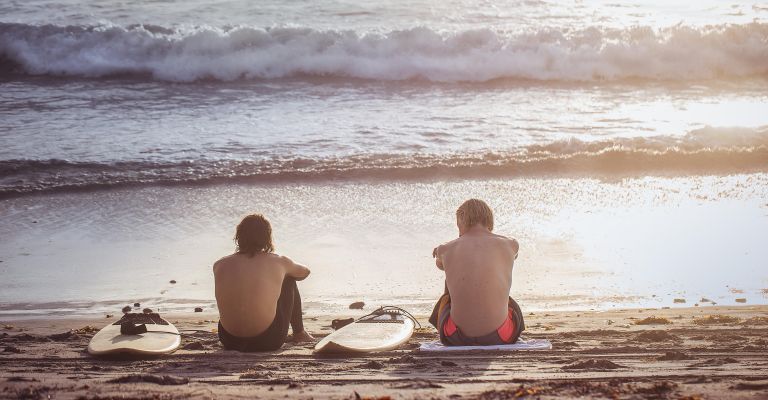 The North Cornish coast stretches for forty miles from Bude to St Agnes, including Padstow and Newquay. Much of the action is focused around the Atlantic Ocean, whether it's surfing, coasteering, exploring rock pools and building sandcastles or walking along the clifftop paths.

Head inland and you'll find unspoiled countryside, with much of the area between Launceston and Bodmin being preserved as the Cornwall Area of Outstanding Natural Beauty (ANOB). Bodmin Moor is a good central base for exploring Cornwall and famous for its massive granite tors, beautiful flora and fauna, wild ponies and pretty villages. Other places to visit include Tintagel, the reported birthplace of King Arthur; Boscastle Harbour; Polperro, once a smuggling hotspot; and the Camel Trail - a fantastic way to enjoy the countryside by foot or bike.

View all holiday cottages to rent in North Cornwall 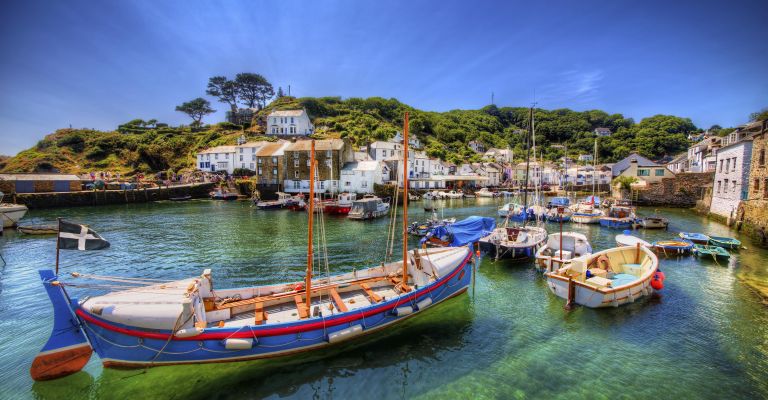 When people picture a typical Cornish scene of fishing boats and harbour side villages with colourful houses and stone-built fishermen's cottages, it's South Cornwall they are thinking of. The coast stretches from Falmouth in the west, up to the river Tamar that separates Cornwall from Devon and takes in the coastal towns and villages of Looe, Polperro, Fowey, Mevagissey and St. Mawes.

Truro, Cornwall's only city, is conveniently central. You'll find something amazing wherever you look in South Cornwall, be it the sun rising over the ocean, or a plate full of freshly caught seafood.

Fishing is still a main source of income for some, with Mevagissey being a busy working harbour. If you want a taste of a typical fishing village, you will find it at Charlestown and Portscatho. As well as its pilchards, Cornwall was once renowned for the quality of its tin.

View all holiday cottages to rent in South Cornwall 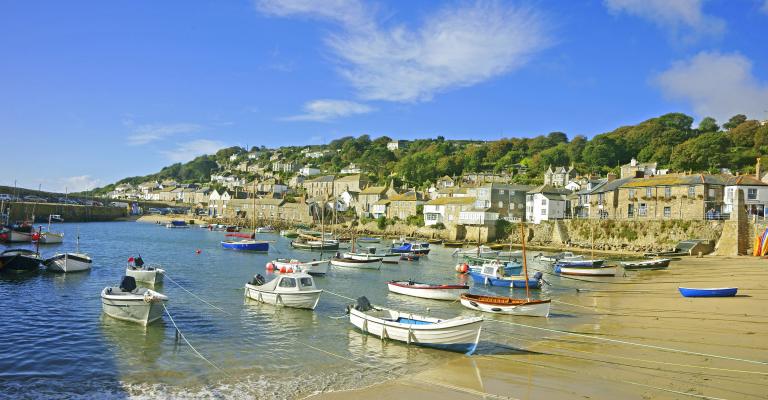 West Cornwall resides at the south-westerly tip of England. The coastline takes in St Ives, Lands End, Penzance, Mousehole (Mouzzle) and Helston on the Lizard Peninsula. The rugged coastline takes in breath-taking scenery including Sennen Cove near St Just, St Michaels Mount and The cove at Mullion.

Several locations in west Cornwall, including Cambourne, Redruth, and Helston, make up the UNESCO Cornwall and West Devon Mining Landscape World Heritage Site. Add it to your itinerary, along with a show at the Minack Theatre between Lands End and Penzance.

View all holiday cottages to rent in West Cornwall 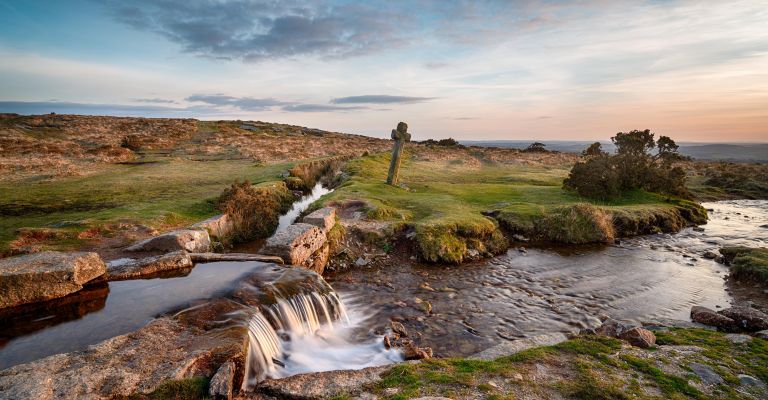 Dartmoor covers a vast swathe of inland Devon, with National Park status protecting the ancient landscape. It's well known for its majestic granite tors and wild ponies but offers a wealth of fun days out for everyone whether your taste is for the adventurous, the exotic or the downright slothful. There are excellent walking and mountain bike trails through Dartmoor National Park. The 95-mile Dartmoor Way could be done in one epic summer's day ride although most visitors just do one or two of the four sections. Whatever you choose, you can expect stunning scenery a bit of a challenge, and an unforgettable experience.

A great day out could include taking a ride on the South Devon Steam Railway before visiting Buckfast Abbey or the residents at the Buckfast Butterfly Farm and Dartmoor Otter Sanctuary, or browsing the shops and farmers' market in Tavistock and stocking up on locally produced goodies. Walk through Lydford Gorge, which is especially beautiful in spring and autumn, scare the kids at Dartmoor Prison Museum, or talk to the animals at Dartmoor Zoo. With fantastic beaches like Torquay and Teignmouth within a 30-minute drive of the centre of the national park, a self-catering holiday in Dartmoor means you can access the best of Devon's countryside and coast with ease.

View all holiday cottages to rent in Dartmoor 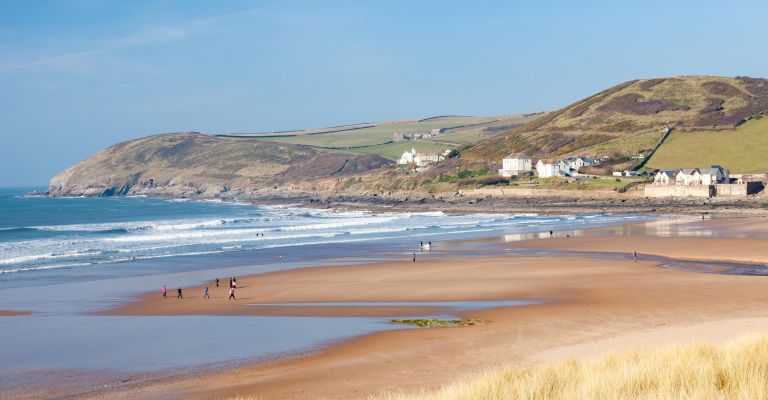 The beach at Croyde, Devon

It's a hotly contested honour, but the cream tea the South West of England is famed for was invented at Tavistock in South Devon. You'll want to refuel with one or two of these during your visit, as you'll need a lot of energy to explore all Devon has to offer. With two national parks (Dartmoor and Exmoor), fantastic beaches, and the busy cities of Exeter and Plymouth, you'll easily pack your days with fun. The Jurassic Coast is 95 miles of UNESCO World Heritage site, protected for its amazing geological features dating back over 200 million years, and covering both East Devon and Dorset.

If you're coming for the beaches, you certainly won't be disappointed. The English Riviera on the south coast including Torquay, Paignton, and Brixham is every bit as popular as Dartmouth, Salcombe and Kingsbridge in the neighbouring South Hams area. Saunton Sands, Croyde and Woolacombe on the north coast are all popular choices with surfers and families, as are Lynton and Lynmouth, fringed by the magical beauty of Exmoor National Park. For those torn between the two, mid-Devon and the tranquil beauty of the Blackdown Hills are good central places to be based on your Devon holiday.

View all holiday cottages to rent in Devon 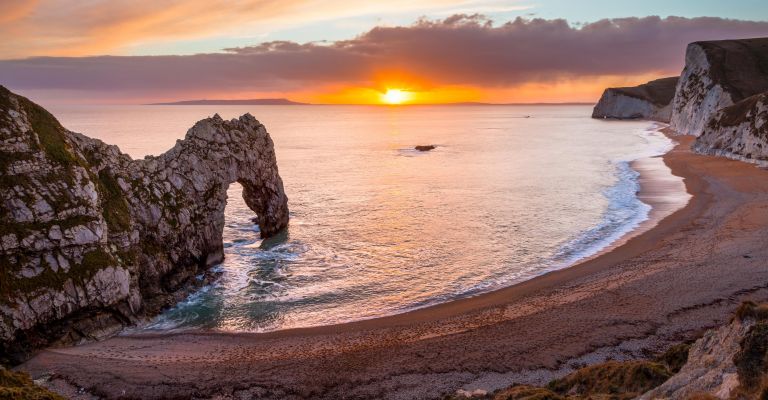 Dorset's considerable appeal is sometimes overlooked in favour of its larger neighbours, but doing so means you miss out! Fantastic beaches include Weymouth, Lyme Regis, iconic Lulworth Cove and Chesil. The latter is 18 miles long with more pebbles than you could hope to count in a lifetime, nestled into beautiful countryside with incredible views. Fossil hunt along the Jurassic Coast, build sandcastles at Burton Bradstock, or head inland and marvel at the massive chalk figure of the Cerne Giant.

Much of Dorset's lush and peaceful countryside is protected as an Area of Outstanding Natural Beauty. Whether you enjoy it on foot, bike, or horseback, it's certainly worth experiencing. Follow a peaceful day with an unforgettable night in Bournemouth's clubs, or tuck into a meal in one of Dorchester's and Pool's many fabulous restaurants.

View all holiday cottages to rent in Dorset

Somerset is bursting with fascinating history, and while it's not stuck in the past, it does convey an irresistible old-world charm. Part of the Roman Empire until 409, it has 11,500 listed buildings, more than 520 ancient monuments, nearly 200 conservation areas, and dozens of English Heritage and National Trust Sites. A visit to the Roman baths in Bath is a must. The Sweet Track is considered by many experts to be one of the oldest engineered roads in the world, dating back as far as 3807 BC.

You have to walk up the tor and visit the ruins of the cathedral at Glastonbury. Wells Cathedral is also worth a look. A walk along the sands of Weston-Super-Mare is either beautiful or bracing, depending on the time of year, but always fun. Walk the Quantock or Mendip Hills, browse the craft shops at Porlock Weir, then refresh yourself at the end of the day with a pint of Somerset cider brewed locally from apples grown in orchards you can see.

View all holiday cottages to rent in Somerset 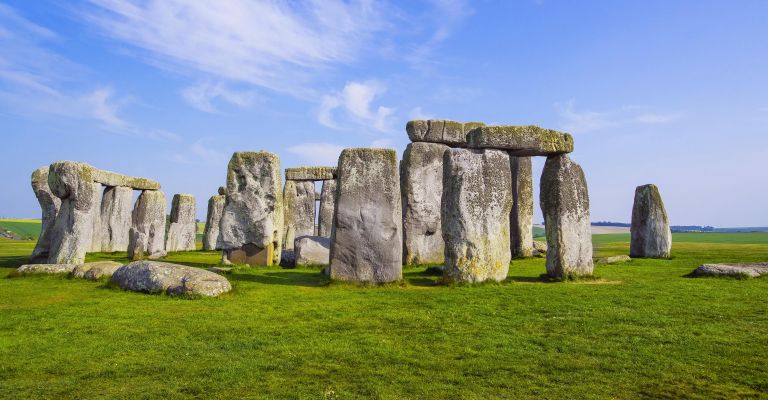 Stonehenge is Wiltshire's biggest tourist hotspot, but in a county that's rammed with interesting and picturesque sights, you're never short of something to do. Along with Avebury, the world's largest stone circle, Stonehenge is a UNESCO World Heritage Site. A visit to either the Salisbury Museum, or Wiltshire Museum in Devizes, sheds more light on these fascinating sites.

If you like your history moving rather than standing in a circle, visit the STEAM museum in Swindon, or marvel at the 29 locks on the Caen Hill stretch of the Kennet and Avon Canal. STEAM is next to a great outlet shopping centre; or go into Salisbury and spend a day shopping and admiring the magnificent medieval cathedral.

Thinking of a break in South West England? Let us tempt you with a selection of our best last minute offers. Remember, we don't charge a booking fee, so the price you see is the price you pay.
↑