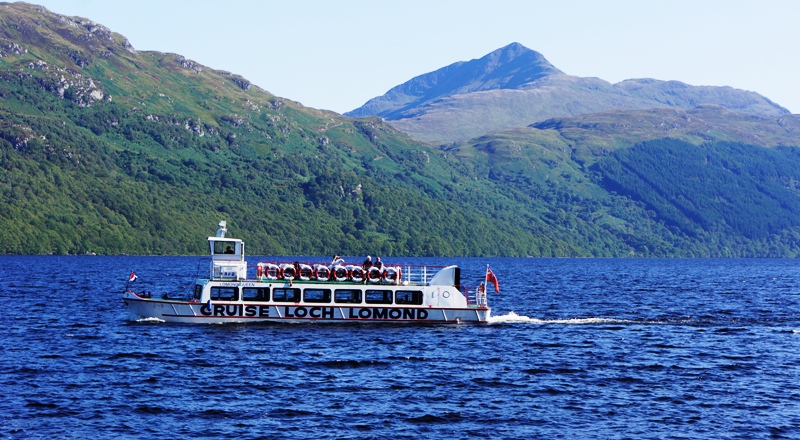 Immerse yourself in the pure beauty of Loch Lomond

Just hearing the name Loch Lomond should make you breathe a little deeper. Imagine filling your lungs with the pure air, and filling your senses with the sights, sounds, and smells of this amazing region. Loch Lomond and the Trossachs National Park is just one of two national parks in Scotland, covering an enormous 1,865 square kilometres of mountains, lakes, forests, villages, and expertly managed landscape that is preserved so you and your family can enjoy it.

There’s no better way to explore Loch Lomond and the Trossachs National Park than by walking. Even if you’re not a keen outdoorsy person you’ll be glad you took the time to do one of the region’s many short walks, such as through the pretty village of Aberfoyle, or along the river at Killin. If you’re not happy on holiday unless you cover miles on foot, you’ll love the choice of walking trails around Loch Lomond and the Trossachs. Pick up the West Highland Way anywhere along the 155 kilometre route between Fort William and Milngavie, or head for the coast on The John Muir Way. The Great Trossachs Way is 50 kilometres of scenery you’ll still be talking about in your dotage.

Climbers can exhaust themselves with more than 21 mountains that tower over 3,000 feet in the national park, many of which are located near Crianlarich or Tyndrum.  One of the delights of this region is the journey. Whether you take the high road or the low road, there are some breathtaking scenic routes that make a perfect day out. See the Falls of Falloch, which are just south of Crianlarich, soak up the magical atmosphere of Faerie Hollow near Balquhidder, and climb Conic Hill for the amazing views.

With so much space to explore you can walk for miles without seeing another person, but that doesn’t mean you’ll be alone because the Loch Lomond and Trossachs National Park is alive with wildlife. From otters to osprey, you’ll be joined by beautiful animals and birds – some of which aren’t easily seen anywhere else in Britain, such as the elusive red squirrel, and the world’s largest grouse, the spectacular capercaille.

Scotland is especially well known for its world class golf and fishing. It’s not surprising that the fishing in Loch Lomond is second to none, given that it has the largest surface area of fresh water of any loch in the UK. The clean water provides an ideal habitat for salmon, trout, and pike, as well as coarse species like perch and ruffe. Golfers of all abilities are catered for with a choice of superb courses, including Loch Lomond Golf Course, which has previously hosted the Scottish Open, and the 9-hole Killin.

Water babies can swim, canoe, kayak, sail, and water ski to their heart’s content, while cyclists can get their thrills on the sweeping roads looping around the loch, over peaks, and through towns and villages, or on challenging off-road trails at Aberfoyle Bike Park, and Glen Finglas.

Attractions in Loch Lomond and the Trossachs National Park

Start your holiday in the National Park at one of the excellent visitor centres where you will find local information, leaflets, and guides to help you get the most from your stay. The visitors’ centre in Aberfoyle is the largest, but there are others in Balloch, Balmaha, Helensburgh, Dunoon, and Stirling.

Parts of Stirling, Perth and Kinross, and Argyll and Bute all fall within the boundaries of the national park. If you’re looking for high street shopping and restaurant chains you will be disappointed. Instead, feast your eyes and taste buds on local food and talents, eating at charming restaurants serving delicious fresh produce, and shopping at independent shops that put the fun back into shopping.

Some of the park’s most popular attractions include Inchmahome Priory on an island on the Lake of Mentheith; the Scottish Maritime Museum in Dumbarton; Hill House, Charles Rennie Mackintosh’s home in Helensburgh, which is now managed by the National Trust of Scotland; and the grounds and play areas at Mugdock Country Park.

Don’t miss the pretty village of Aberfoyle. The Olde Christmas Shoppe, where you can buy into the spirit of Christmas all year round, is on Main Street, just next to the Coach House Inn, where you can tuck into great pub meals and spirits of a different kind!

Getting to Loch Lomond and Trossachs National Park 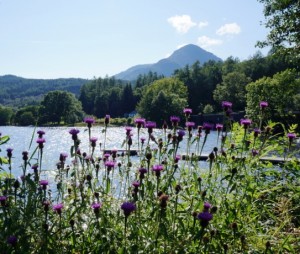 While you can tour the Loch Lomond and Trossachs National Park without a car, you will be reliant on the local bus and boat services. The easiest way to get around is with a car. It’s possible to hire a car at Glasgow International Airport, which is less than an hour’s drive away. Alternatively, mainline train services connect the park’s larger towns of Balloch, Helensburgh, and Dumbarton to Glasgow and Edinburgh.

As well as changeable weather (this is Scotland, after all!) one thing you should certainly plan for is the slower, more relaxed pace. There’s something about the timeless landscape, which has remained unchanged for countless generations, that makes you want to stop and take it all in. It’s almost impossible to leave Loch Lomond and the Trossachs National Park without being happier and more relaxed than you arrived.

If we’ve tempted you to visit, let us help you find self-catering accommodation in Loch Lomond and the Trossachs National Park.