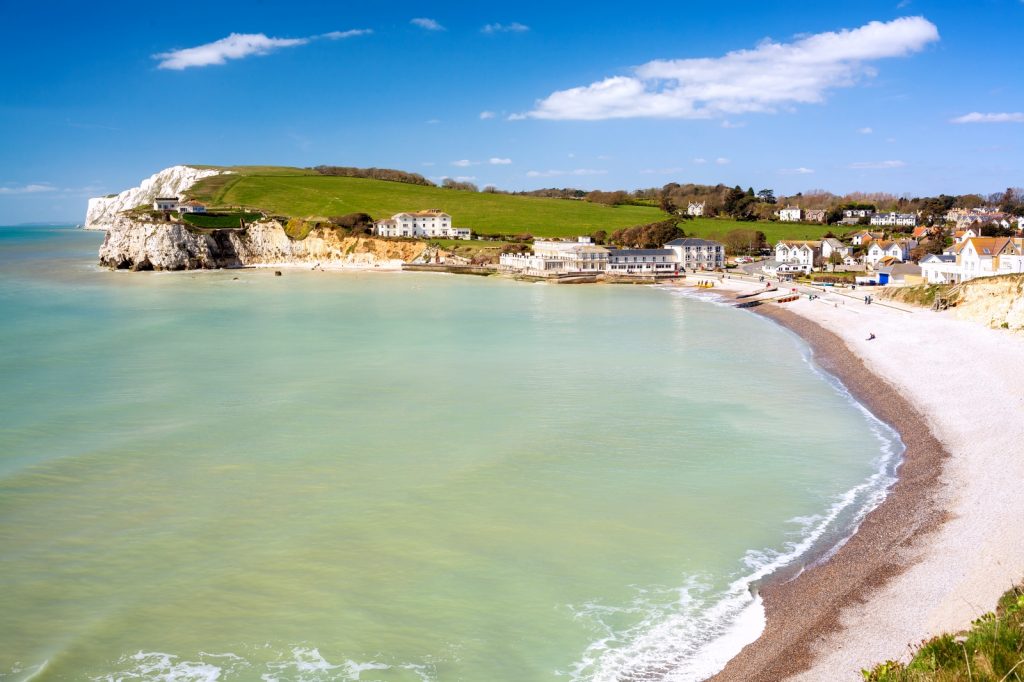 Freshwater Bay, one of the island’s finest beaches & many reasons to vist

Enid Blyton may have set The Famous Five series in Dorset, but all I could think of as we drove to our holiday cottage was how much the Isle of Wight reminded me of the books I loved as a child. The peaceful countryside couldn’t have been more different to the commercial, bustling mainland we left behind, and I was happy to see the kids were as entranced as I was.

A hop, skip and a ferry trip 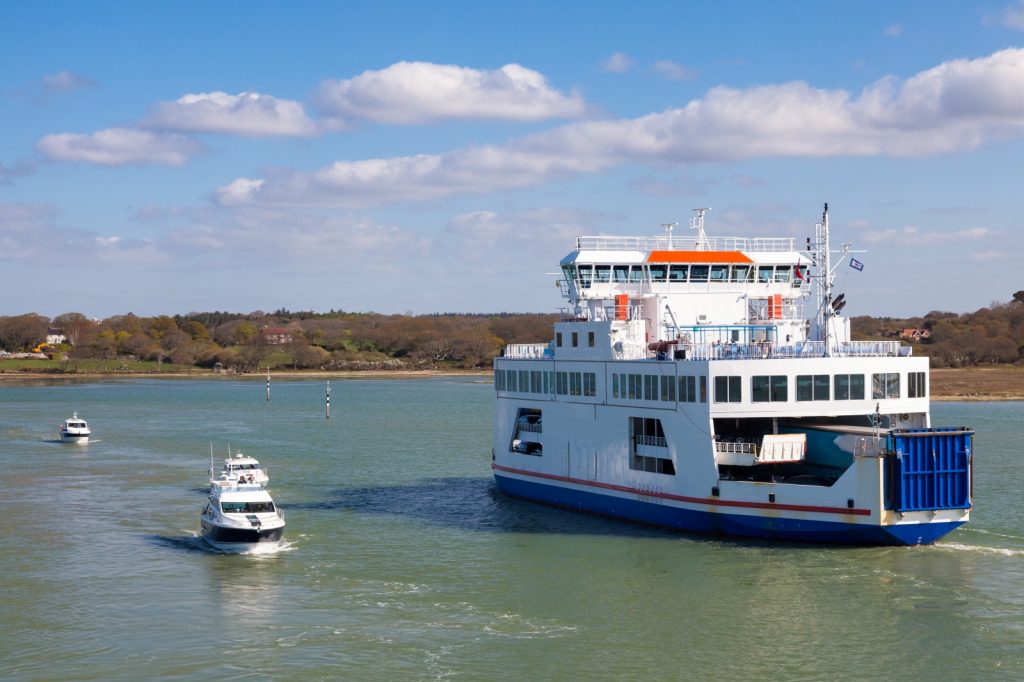 Even travelling to the Isle of Wight is fun

You need to take a ferry to get to the Isle of Wight as there is no bridge across the Solent. We chose to leave from the smaller port of Lymington as we were coming from the west. The drive to get there took us through the New Forest – very pretty, but worth noting that it’s mainly single A-roads which can be particularly busy as you go through villages on a Saturday. We hit some traffic on the way to the port, but that frustration was quickly forgotten as we parked the car and walked up to the top deck to enjoy the view and the sunshine. Disembarking took no more than five minutes, and I was in a much more relaxed mood as we drove away from Yarmouth.

Arriving in the Isle of Wight is like stepping back in time as you pass through unspoiled villages, with lush farming pasture on one side and rugged cliffs hugged by golden sands on the other. The island is easy to navigate as it is small and there simply aren’t that many roads. It took us around 30 minutes to get from the port to our holiday home in Niton on the island’s southern point. We decided to stay here purely because we liked the look of our accommodation so much, and it turned out to be the perfect area for a family with young kids. Nightlife was limited, so if you’re looking for more excitement from your holiday then you would be better off staying around Ryde, Newport or, in early August, Cowes.

So much to do, or relax and do nothing

The glorious golden beach at Sandown

Our days were split into two halves, with lunch being sandwiched between a visit to Ventnor Beach and another activity. Sandown was especially popular with our boys due to the great park across the road from the beach, but we also enjoyed Shanklin Beach and Compton Beach.

You can’t visit the Isle of Wight without seeing the Needles and the coloured sands of Alum Bay. My youngest was too scared to go on the chairlift down to the bottom, so we left the others to it while we enjoyed an ice-cream and a carousel ride. Other popular outings were to the Donkey Sanctuary in Ventnor and the Botanic Gardens.  We spent a windy but fun afternoon watching the boats in Cowes, which has some fantastic independent shops I could have browsed in for hours. Newport is the Isle of Wight’s biggest town, and where you will find familiar chain stores, large supermarkets, and restaurants.

Almost half of the island is designated as an Area of Outstanding Natural Beauty, making it a nature lover’s paradise. With more than 500 miles of footpaths and bridleways, you never need take the same route twice. We only explored a fraction of these as the kids were more than content to play at the beach and, given that it was my holiday too, I was more than content to lay there and watch them. Had we felt the urge to be more active, we could have chosen to sail, horse ride, cycle, have a round of golf, paraglide, surf, windsurf, or go on a tree climbing adventure.

As pretty as a postcard 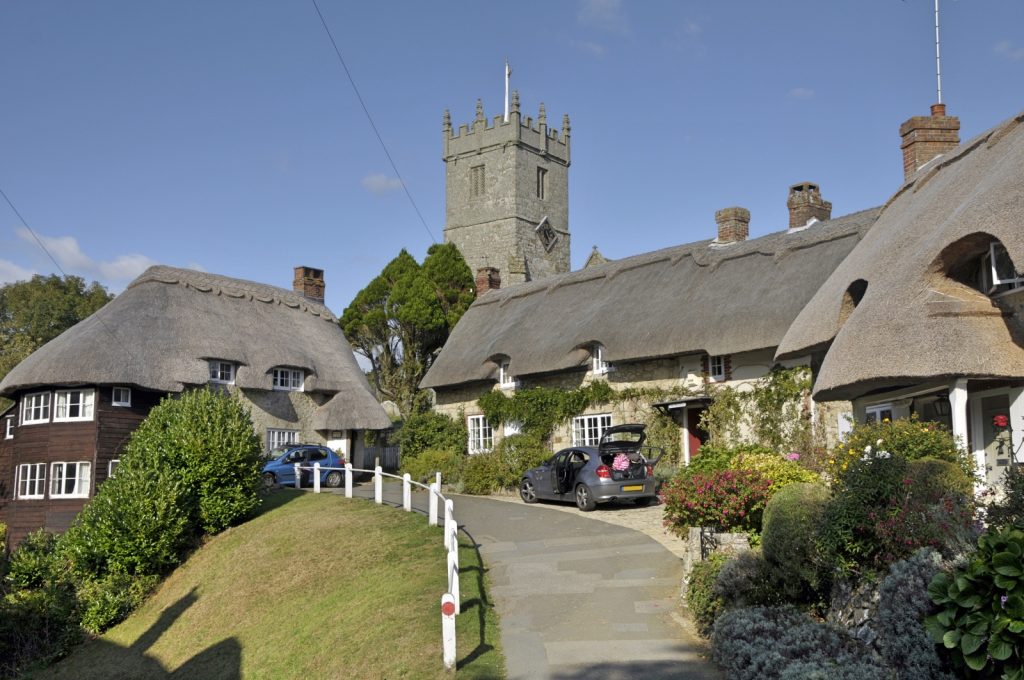 Godshill, one of the many pretty thatched villages to visit

The prettiest village on the Isle of Wight is Godshill. Its beauty is a little spoiled by the hordes of tourists that descend on it, but you can avoid most of these if you visit reasonably early in the morning. I loved the thatched cottages, the medieval church and the locally produced ice cream. Winkle Street in Calbourne is possibly the most gorgeous road in England, though the locals probably wouldn’t want me telling you that as I imagine they get fed up with people walking up and down their street, taking photos!

While the weather on the Isle of Wight is normally pretty good, it does get its fair share of rain. It wasn’t enough to dampen our holiday spirit as there were enough indoor attractions to keep us happy. Dinosaur Isle is small, but fantastic for those with paleontological interests, and Bembridge Lifeboat Station is also a good way to pass an hour. Osborne House was a great outing. In true Victorian style, it’s packed to the gunnels with all manner of interesting artefacts from around the world that were given to Queen Victoria, which both amused the kids and made me shudder at the amount of dusting they must require. We also visited pottery and glass-blowing studios, and indulged in plenty of cream teas.

It’s fair to say the Isle of Wight is small, but perfectly formed. It packs a lot into a tiny space, and you’re as likely to find people visiting for the live music at Bestival or the Isle of Wight Festival, as you are for the annual walking festival, sailing regattas, food events (including the Garlic Festival), cycling races, horse racing, and car shows. May to September is the busiest time of the year so you should plan to book your self-catering accommodation well in advance if you want to visit during these months. 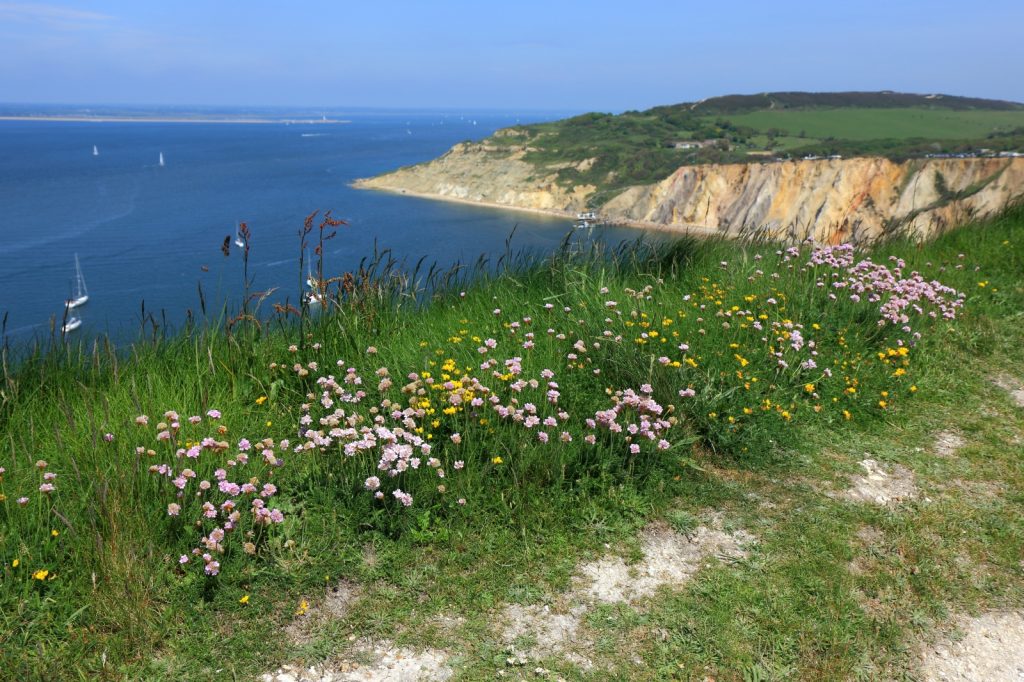 Explore the coastal path, the sea views are simply stunning

The Isle of Wight has it all in a very pretty package. If you’re looking for a traditional beach holiday without nasty commercial trappings, it’s here. Fancy a weekend hiking the coastal path and enjoying amazing views in the daytime, followed by a top meal in a fantastic restaurant at night? Here. How about a legendary weekend at a music festival; wind-chapping fun on the water; cycling the ‘Round the Island’ 100K route; or simply relaxing with a good book? Here, here, here and here.

We fell in love with the Isle of Wight, and have been back several times. Why not make a date and let yourself be bewitched by its beauty, too.

If we have tempted you to visit, take a look at our self-catering cottages on the Isle of Wight 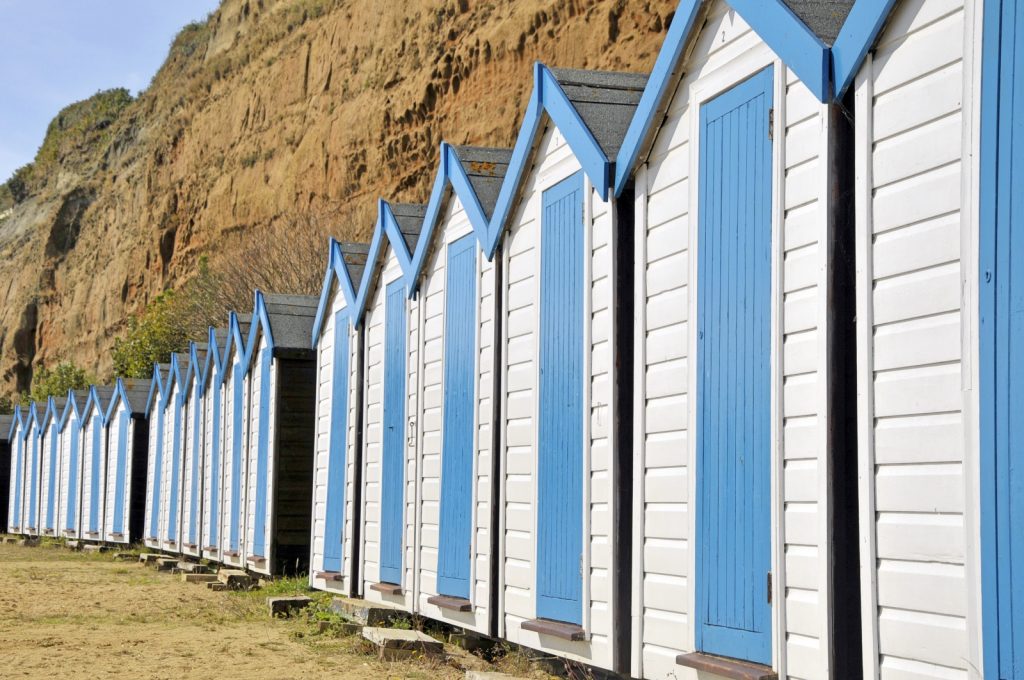 The Isle of Wight, full of traditional charm