Holiday Cottages and Self Catering in Hebrides

The Hebrides, comprising of the Inner and Outer Hebrides, are a group of islands located off the west coast of Scotland. With a long history, many of the islands are inhabited including the Isle of Lewis, Isle of Harris, North Uist, Benbecula, the Isle of Skye, South Uist, Isle of Mull, Barra and St Kilda. Each of the islands have something unique and special to offer visitors, from untouched beaches and mysterious archaeological sites to volcanic terrain and deep, serene lochs. All major forms of transport are available to get to the islands, with ferry journeys being extremely popular. Read more 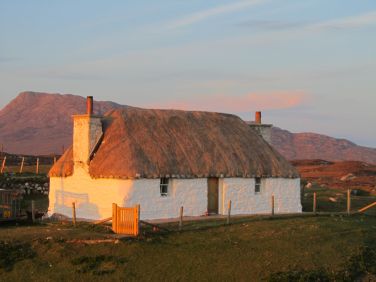 If you're searching for a true escape - a place you can get away from crowds, noise and light pollution, you'll love Glaic Cottage. This Grade B listed blackhouse is on North Uist in the Outer Hebrides and has recently been restored and refurbished to provide luxury accommodation for one or two people. It's near Claddach Carinish with no nearby neighbours. The location is ideal for exploring the beautiful beaches, landmarks, and hills of North and South Uist, with day trips to other islands within easy reach. It's available for holiday booking all year round. 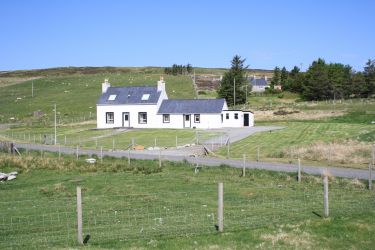 With white sandy beaches, crystal clear rivers, ancient monuments and modern rural communities, it's no wonder the Isle of Lewis and Harris is considered one of the most scenic spots in Scotland, if not the entire UK. This charming holiday cottage is a modern take on a traditional crofter's home, sleeping six people in three bedrooms with loads of space and fantastic views over the Gress River. The beach is a short walk from the door, and there are miles of footpaths, bridleways and cycling routes to explore. Stornoway is a 15-minute drive from the door, so you're close to shops, restaurants and other useful amenities.

Find out more about Hebrides

The Hebrides are home to the magical traditions and elements of Gaelic culture that have been lost in many parts of mainland Scotland. Still using the Gaelic language and keeping the spiritual nature of Scottish history, the people of the Hebrides celebrate their heritage with many festivals and cèilidhs (social gatherings). Music in the form of bagpipes and fiddles, as well as singing and dancing, are central to these festivals. Well worth a visit for those wanting to experience true Scottish culture, the Gaels can be summed up in their saying  'Thig crioch air an t-saoghal ach mairidh gaol agus ceòl', which translates to, 'The world will come to an end but music and love will endure'.

As well as Gaelic culture, the sights on the islands are unmissable. Many untouched beaches and coves are there to be discovered, as well as an environment full of rare species. Dolphins, puffins, golden eagles and sharks are just some of the species you can see on the many wildlife cruises available on the islands. Away from the United Kingdom, the Hebrides have been left to flourish, with copious amounts of untouched natural beauty. The white coasts and turquoise waters do not seem as though they belong in this area, yet surround every island of The Hebrides. The isle of South Huist boasts twenty miles of white shores to relax on, with no fear of crowding.

As well as the abundance of coastal areas, there are a range of other terrains to explore. The Isle of Harris has a varied landscape. Cliffs, mountains, meadows, lochs, beaches and bays are all parts of its amazing environment. The Isle of Lewis is the biggest and most populated of the islands. Here you can find many archaeological sites, such as the Callanish Stones, a group of large standing stones that pre-date the Pyramids. The volcanic island of St Kilda is also worth a visit. Now unpopulated, there are many myths and legends about the Kildians to read and learn. One of the villages remains untouched, ready to explore and imagine the history and traditions of Kildian life. The natural phenomenon, Aurora Borealis, can also be seen from the Hebrides at some points of the year, filling the skies with colour and wonder.

The mere thought that there are so many untouched and unseen places in the Hebrides is enough to warrant a trip there. With the wonderful landscapes, amazing natural beauty, stunning beaches and friendly inhabitants, it is hard to see why more people haven't visited these amazing islands; the true cores of Gaelic culture.