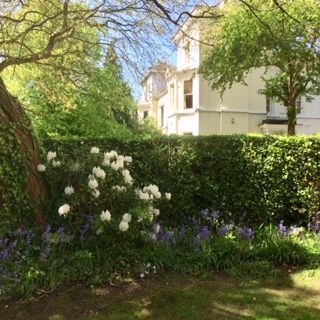 About The Carriage House

The Carriage House is a spacious ground floor apartment in the owner's handsome Victorian house which dates from 1842. It sits back from a quiet, street near Princes Park and, while its leafy outlook feels a million miles from the bustling city centre it is only a five minutes away. The layout is perfect for couples or individual travellers who are in Liverpool for a fun, sightseeing holiday but is also a convenient base for those in the city for work.

While many people immediately think of the Beatles when asked about Liverpool's history, the city was rocking long before the Fab Four came on the scene. Much of the city, including the area around The Carriage House, is protected as part of one of 36 separate conservation areas that range from Canning Street to Wavertree. The entire waterfront has more Grade I listed buildings than anywhere else in the UK and is a UNESCO World Heritage Site. Start your sightseeing at the Royal Albert Dock where there is a Beatles museum, the Tate Liverpool gallery, and plenty of places to eat, drink and shop. As you sit in a bar overlooking the Mersey, try to picture the setting in its working heyday, around the time The Carriage House was built, when more than 40% of the entire world's trade passed through Liverpool's Docks.

Fans of The Beatles have plenty of photo opportunities around Liverpool, including the Cavern Club, Penny Lane, Strawberry Field, and the childhood homes of Paul McCartney and John Lennon which are now in the care of the National Trust. Browse the shops in the Cavern Quarter for souvenirs and stop by one of the many pubs where cover bands play tribute to Liverpool's most famous sons.

Liverpool's attractions are plentiful and include the Merseyside Maritime Museum, ferry trips on the Mersey, Liverpool's magnificent cathedral, Sefton Park, and the Walker Art Gallery. Cross the river to Birkenhead to see a real German U-Boat, or climb to the clocktower of the Liver Building for panoramic city views.

From historic buildings to modern shops and nightclubs, Liverpool has something for everyone. It is a place where culture and industry sit side by side, creating a vibrant atmosphere you won't be able to resist. With short breaks possible all year round at The Carriage House, it's a fantastic choice for an exciting weekend or a longer stay at any time of the year.

The owner of The Carriage House has turned the ground floor into a private self-catering property. They live on the upper floors and are there to welcome guests and answer any questions, but the apartment is entirely self-contained with its own entrance.

Outside: There is off-street parking for two cars, and a private garden at the rear of the house with mature flowering plants and a leafy outlook.

Additional Information: All utilities, WiFi, bed linen and bath towels are provided. Short breaks are possible depending on availability. Smoking and pets are not permitted.