Covid-19: We are more than happy to move or refund any bookings, without penalty, which can't be kept due to Covid, eg. travel restictions, illness or isolation.
We are undertaking extra cleaning during this time and have extended our changeover time to allow for this. We ask that guests please do not arrive early or leave late, arrival anytime after 5pm, check out before 10am. We ask that guests strip all used beds, including quilted protectors, to assist our cleaners and keep everyone safe. 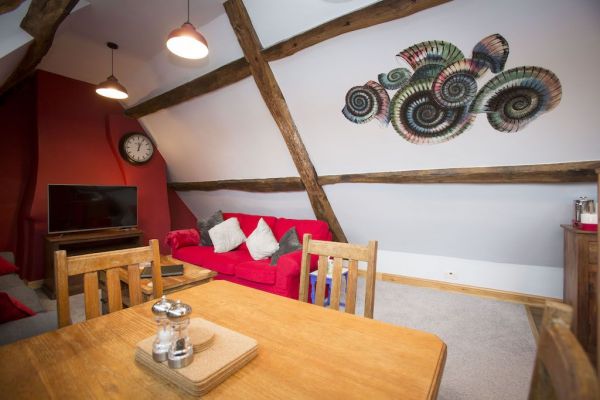 Ammonite Loft is a fantastic self-catering property with loads of character. The owners have transformed the top floor apartment into a light and spacious home-away-from-home, with room for up to four people to sleep in two well-appointed bedrooms. The building is in the centre of Old Whitby, surrounded by historic buildings and within walking distance of shops, cafes and welcoming pubs like The Dolphin and The Endeavour. It's perfect for couples, friends and families with older children.

Whitby has long been a favourite holiday destination for the warmth of the community and the beauty of the location. There is always something interesting to see whatever the season. Whether you're watching the boats go about their business in the busy harbour, climbing the 199 steps (you'll be counting!) to the romantic ruins of the 7th Century Abbey, or settling back in your deckchair on the sand in front of the colourful beach huts on Whitby beach. Captain Cook is arguably Whitby's most famous export and you can find out more about this explorer at the Captain Cook Memorial Museum.

There is so much to do in and around Whitby that being bored is never a consideration. Walking, cycling, golf, sailing and fishing are just a few of the many ways to immerse yourself in the beautiful landscape. When the weather is dry, walk the circular route past Whitby's abbey and lighthouse before turning back at Saltwick Bay, or set out along the coast on the 3.5-mile footpath to Sandsend. Fans of the Harry Potter film series should not miss a ride on the Goathland's Railway with a stop at Goathland station which doubled as Hogsmead in the movies. Other routes include those to May Beck and Falling Foss, around the Larpool viaduct and along part of the long-distance Cleveland Way.

The North York Moors National Park is just a stone's throw from Whitby providing access to countless miles of footpaths, bridleways and cycling routes, not to mention vast expanses of moorland and big sky views.

Nearby attractions include Eden Camp in Malton, the Bark Endeavour Captain Cook Experience, and the North Yorkshire Moors Railway. Day trips can include a visit to Robin Hood's Bay, Staithes or Runswick Bay. Those with a serious sweet tooth will be happy to learn that the North York Moors is Britain's Capital of Cake and that there is always a welcoming tea shop waiting to greet you with a slab of home-baked goodness and a pot of Yorkshire's finest tea.

Whatever your reason for visiting Whitby, staying at Ammonite Loft puts you in the heart of the Old Town letting you play - even if only for a few days - your role in the history of this beautiful town.

Ammonite Loft is a top floor apartment with a private entrance and history dating back over 200 years. Although it is close to the centre of town, its location in a quiet courtyard ensures a peaceful stay. Accommodation is over two levels. Please note there are 27 external steps to this property, and steep internal stairs, as it is on the 2nd and 3rd floor.

Additional Information: All utilities, WiFi, bed linen and bath towels are provided. The apartment comes with a free parking permit (please note the car park is a 10-minute uphill walk away). The owners aim to support an eco-friendly lifestyle with green electricity, eco cleaning products and LED lighting. Pets and smoking are not permitted. Due to the top floor location and steep flight of steps, the apartment is not suitable for children under four years old.