Enquire / Book
Covid-19: Please refer to our holidaymaker guide for the latest advice and information regarding current UK travel restrictions. 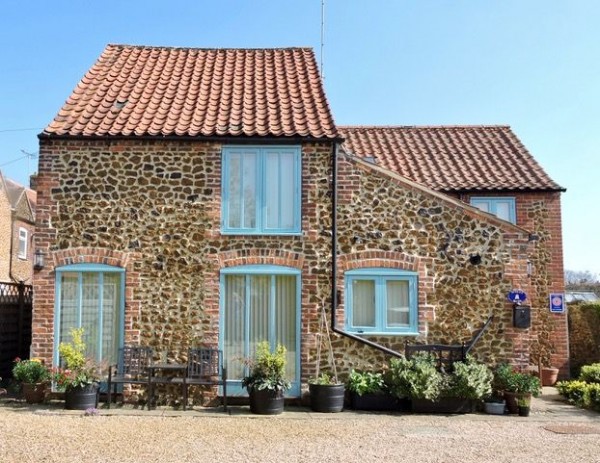 Located in glorious West Norfolk, now becoming known as the Royal Coast, Scoles Barn is a warm and welcoming detached holiday home, sleeping four and ideal for couples or a family. It has been converted from an old stable constructed in traditional local carr stone and is furnished to a high 4 Star comfortable standard with full central heating. Conveniently tucked away in the centre of the village of Dersingham, Scoles Barn has private courtyard parking and a small pretty garden. With plenty of buses and access to the North Norfolk coast via the Lynx Coastliner bus bus route, Scoles Barn is ideally situated for discovering Norfolk and suitable for people who want to leave the car at home and travel by public transport.

Dersingham is a thriving village with two supermarkets, two pubs serving good local food, several fast food outlets and Thaxters, a popular coffee shop - all within five to ten minutes easy walking distance. In the nearby towns and villages there are plenty of eateries that pride themselves on promoting and supporting local farmers and food producers. Dersingham lies mid way between the seaside resort of Hunstanton, affectionately known as ‘Sunny Hunny’ and the medieval port of Kings Lynn with its links to the Hanseatic League.

West Norfolk is well blessed with many attractions to entertain the visitor all year round including Royal Sandringham, only one and a half miles away and a little further afield lie the stately homes of Houghton, Holkham and the National Trust properties of Oxburgh, Felbrigg and Blickling Halls. There are many outdoor activities to enjoy including cycle routes, excellent walking, golfing and water sports. Dersingham is also convenient for exploring the wild North Norfolk coast with its vast beautiful sandy beaches that are just a short drive away. Scoles Barn is close the village Recreation ground with its refurbished children’s play area.

The coastline of Norfolk is a must for birdwatchers, where you can see the large flocks of winter visitors in particular the pink-footed geese which are often seen flying overhead from their roost at RSPB Snettisham to the fields inland to feed. RSPB Titchwell is a short drive away with its expansive salt marshes and lagoons.

For walkers there are plenty of way marked paths, in particular the Peddars Way and the North Norfolk Coast Path which makes its way through salt marsh, quaint coastal villages and harbours and across glorious sandy beaches such as Brancaster, Holkham and Wells.

Cyclists will enjoy, as part of the National Cycle Network, the Peddars Way trail from the heaths of the Brecks to the wild North Norfolk coast or the Norfolk Coast Cycle way from Kings Lynn to Cromer.

Watersport enthusiasts can enjoy kite surfing, sailing and wind surfing at Hunstanton which also has a Sea Life Centre and offers traditional seaside attractions to tempt you away from the only west-facing beach in Norfolk. Golfers too are well catered for with notable clubs such as Kings Lynn at Castle Rising, Old Hunstanton at Hunstanton and the Royal West Norfolk at Brancaster.

With other attractions including Dersingham Bog, a National Nature Reserve, Heacham Lavender, Snettisham Park Farm, Bircham Windmill and boat trips to see the seals, there is always plenty to keep you amused in Dersingham.

Additional information: All linen provided including bed linen, towels and tea towels (please bring own beach towels). Electricity and heating also included in the price. No pets and no smoking. Scoles Barn is suitable for children however, equipment or facilities for babies and infants are not provided. Short breaks for three nights or more are welcome. Scoles Barn is suitable for people who want to come via public transport with trains to Kings Lynn then a bus to Dersingham. Regular buses to Hunstanton link to the Lynx Coastliner bus and Kings Lynn for further afield. Welcome tray, games, books and puzzles provided.

Other popular towns / villages in Norfolk