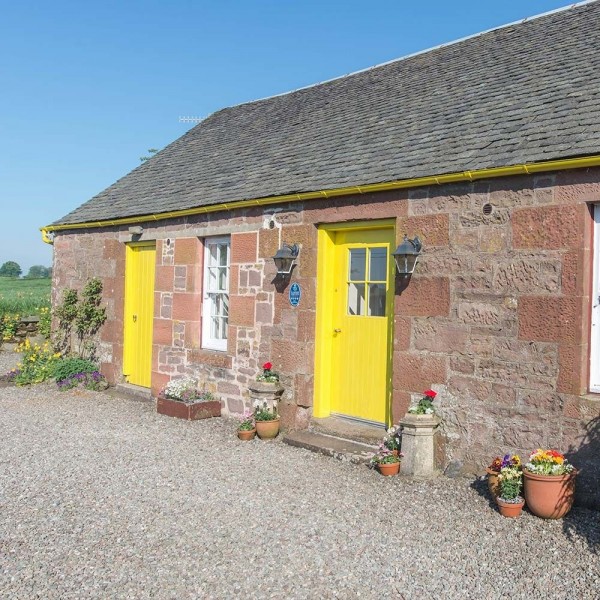 Ballat Smithy Cottage is a welcoming holiday home for couples, families and friends. Made from locally quarried stone, the charming former smithy's workshop dates from the late 1700s and sleeps four people in two bedrooms with accommodation all on one level. It's just outside the Loch Lomond and Trossachs National Park and within easy reach of beautiful Loch Lomond and lots of Scotland's most popular sights and attractions. It's available for bookings all year round with short breaks possible depending on availability. Balfron is just over two miles away, with a small supermarket. Other shops and amenities are three miles away in Drymen. There is also a choice of good farm shops locally - eating well is not a problem!

Central Scotland may not have the dramatic mountains of the Highlands, but it is certainly not without drama. Glasgow, Edinburgh, Stirling, and Bannockburn are all within 30 to 60 minutes by car, giving you a front-row seat - albeit centuries later - to some of the most important events in the nation's history. Balfron was immortalised in writing by Sir Walter Scott in "Rob Roy" and Robert Louis Stevenson's "Kidnapped" when Rob Roy's son abducted a young widow and forced her to marry him. Though unfortunate for the young lady, that event pales in comparison to the Battle of Bannockburn and the events at Stirling Castle, formerly Scotland's royal seat of power and where Mary, Queen of Scots was crowned. Doune, Balloch and Dumbarton Castles are also less than half an hour's drive from the cottage.

Glasgow is also just half an hour's drive from Ballat Smithy Cottage, so it's not surprising that Balfron was an early holiday destination for Victorian workers escaping the smoggy city for the fresh air of Loch Lomond. Glasgow and the Clyde have long shipbuilding and maritime history. The Maritime Museum in Dumbarton is a must if you're interested in this era. Edinburgh is just over an hour's drive from the cottage. Though geographically close, the two cities couldn't be more different with each wonderful in its unique way.

Many guests staying at Ballat Smithy Cottage do so for the fantastic walking and cycling. Local footpaths lead to the shores of Loch Lomond, Ben An, Conic Hill, Dimpling, and Ben Lomond. The cottage has secure bike storage for guests who want to make the most of the exhilarating and beautiful off-road trails, including those through Argyll Forest Park, Queen Elizabeth Forest Park as well as the Lifecycle Trust’s Endura trails next door. Road cyclists can follow National Cycle Route 7 for inspiration. Golfers can enjoy the links at Carrick, Buchanan Castle, Strathendrick, Aberfoyle, and Stirling. If you're happy to drive, you can also play at Gleneagles (40 minutes) and St Andrews (1 hour and 40 minutes but worth the drive!).

There's no end to the fun and adventure you can have when you stay at Ballat Smithy Cottage. Its location is wonderful for people who enjoy being outdoors as it is for foodies and history lovers. Having two cities within easy reach also makes a day of shopping and sightseeing easy to arrange.

Location (Loch Lomond and the Trossachs)

Outside: The cottage has a low maintenance garden with lots of flowering plants, a table, and bench seating. There is off-street parking for two cars.

Additional Information: All utilities, WiFi, bed linen and bath towels are included. Guests to bring cot bedding if required. Short breaks are possible, depending on availability. Preferred changeover is Saturday but the owner will try to be flexible where possible. Smoking and pets not permitted.