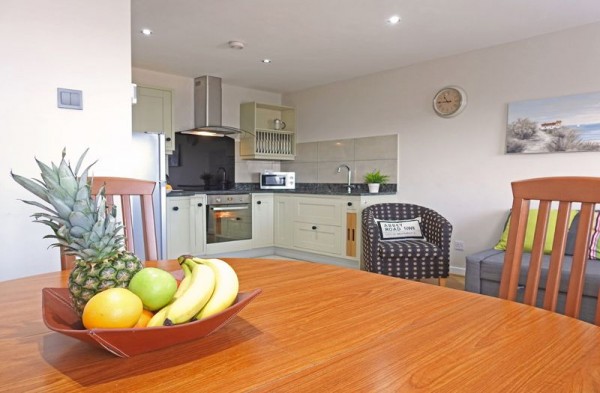 Harbour View 2 is a fantastic modern self-catering apartment close to the marinas and Gosport waterfront. It sleeps up to four people in two bedrooms, so is very comfortable for couples, families or friends, with the potential to sleep a further two people on a sofabed in the living room. The apartment building is on the end of the pedestrian high street in the centre of town, opposite the harbour entrance, so you'll have everything you need within a short stroll and are close to major traffic links.

As you wander around Gosport's waterfront, stopping to admire views over the water to Portsmouth and the Isle of Wight, you're reminded that Gosport was once an important naval stronghold. In the two miles between the Royal Naval Submarine Museum and Explosion! and The Museum of Naval Firepower, you'll pass Fort Gilkicker, Fort Monckton and Fort Blockhouse. The town has an excellent choice of places to eat, drink and shop, with local attractions also including Little Woodham Living History Village, Alver Valley Country Park, the Museum of Diving, and the Hovercraft Museum. Gosport is a hub for watersports so you can also sail, go jet skiing, paddleboarding or kayaking.

Once you've explored Gosport, wander down to the ferry terminal and take the short crossing to Portsmouth. Go shopping, see a film or a show, and enjoy a meal or a big night out. Portsmouth's Historic Docks showcase why Britain's navy was so feared with the remains of the pride of Henry VIII's fleet, the Mary Rose and Nelson's flagship HMS Victory upon which he led Britain to victory over Napoleon and the French.

Day trips can include taking a ferry from Portsmouth to the Isle of Wight, hiring a bicycle and exploring the New Forest National Park, or packing a picnic and walking along a few of the 230 miles that make up Hampshire's coast. Beach, town, country, forests and water - it's all waiting for you when you stay at Harbour View 2.

Harbour View 2 is a second-floor apartment which has recently been updated and refurbished to offer a 4-Star standard of accommodation all on one level.

Additional Information: WiFi, utilities, bed linen and bath towels are all included, with guests to provide beach towels if they are required. Smoking and pets are not permitted.