Group bookings available This property is one of 8 properties which, when rented together, can accommodate up to 60 guests 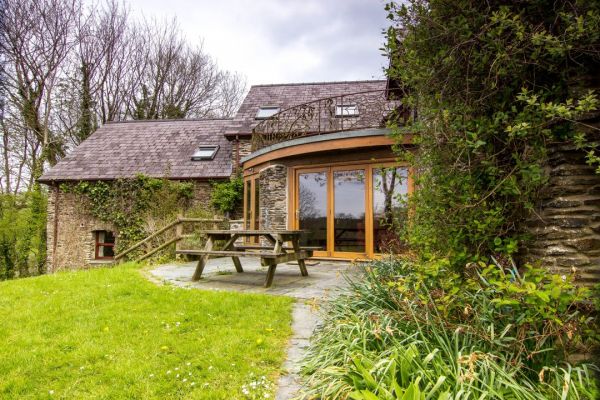 Ceridwen puts a tick in every box when it comes to self-catering properties for large groups. The house is part of the award-winning Ceridwen Centre in the Teifi Valley in West Wales and enjoys beautiful views of the nearby woodland and surrounding valley. It was crafted using local materials and traditional techniques, and it sits comfortably in its hillside setting, with space for up to 19 people to sleep in eight bedrooms.

The Ceridwen Centre has 40-private acres offering a variety of accommodation for up to 60 people, ranging from B&B rooms to a glamping eco pod and even a converted double-decker bus! There is a licensed bar which is open when on-site events are taking place, but even when they are not, it sells organic wines, cider, spirits and local ales from micro-breweries. Footpaths lead straight from the door, there is a mountain bike park on-site and the owners also run West Wales bike skills events and guided trails (advanced booking is a must!). Just a mile from the centre is the village of Drefach Felindre with the Tafarn John Y Gwas pub (serving a very good pint of local ale), the Red Lion Pub and a village shop.

The Teifi Valley gets its name from the river which snakes through 75 miles of lush Welsh landscape as it makes its way from Llyn Teifi in the Cardigan Mountains to Cardigan Bay. There is plenty to experience here whatever time of year you visit and whatever your interests. Walking is a favourite pastime as some of the spectacular views, such as the Ffynone Waterfall in the lower Teifi Valley, are best reached on foot. There are some equally impressive views from cycling paths and Sustrans routes, as well as some fun and challenging mountain bike trails.

Opportunities for fun on the water are plentiful. Ceridwen’s central location gives easy access to beaches facing both the Irish Sea and the Atlantic Ocean. Head north to Llangrannog to the closest beach or Aberporth and Tresaith, where there is also a waterfall, or to Mwnt where you may be lucky enough to spot some of the local Cardigan Bay dolphins. You could also try your hand at sailing, canoeing or paddleboarding on the river (Llandysul Paddlers is an excellent local adventure centre popular with kaykers just three miles away). The traditional Welsh coracle was widely used for salmon fishing (and poaching!) on the Teifi River, and there is a small museum near the Cenarth Falls in Newcastle Emlyn which celebrates their history.

It is not all non-stop adventure in the Teifi Valley, or at least not unless you want it to be. It may be difficult to believe, but the now-peaceful village of Dre-Fach Felindre (close to Ceridwen) was once the centre of a thriving woollen industry, and you can find out more at the National Wool Museum where there are hands-on activities as well as a cafe and gift shop. The West Wales Museum of Childhood is also close by, and further afield, the Botanic Gardens of Wales and Aberglasney House and Gardens have stunning collections of plants from around the world. Alternatively, you can discover the local flora at the Welsh Wildlife Centre and Teifi Marshes Nature Reserve.

Wales has a history rich with strife as evidenced by its numerous castles such as Cilgerran Castle and Cardigan Castle which are both a short drive from Ceridwen, and the magnificent Pembroke Castle, the birthplace of Henry VII, around an hour from Ceridwen and on the way to Tenby and Folly Farm.

Ceridwen’s fantastic location makes it ideal for large groups. There is such a wealth of diverse attractions to suit all ages and abilities within easy reach, while the high standard of accommodation gives everyone a comfortable place to stay and enjoy discovering the Teifi Valley.

Ceridwen is large enough to accommodate up to 19 people with ease, with a layout that both encourages socialising and provides quiet spaces for peace and contemplation. There are two floors as well as a variety of outdoor areas.

Outside: There are several paved areas close to the house with picnic benches and seating, and a barbecue. A large garden is perfect for ball games and playing, and it has access to the fields nearby. There is ample off-road parking.

Additional Information: Ceridwen has central heating and WiFi. All linen and utilities are included, with guest asked to bring their own towels. A basket of logs is provided with further wood available at a small cost. Up to three well-behaved dogs are welcome with prior agreement from the owner. No smoking is allowed in the property. Should you want a night off cooking, meals can pre-prepared/ordered so that all you have to do is pop them in the oven - please speak to the owner who can also provide information on the special food nights catered for by their on-site chef Rob (pizza and open mic nights are always a hit!). You can also buy local produce/crafts from the on-site shop, pre-order celebratory cakes or maybe pre-book a local beauty therapist for some holiday pampering - the owners are only too happy to help make your holiday special and memorable. Function rooms can also be hired for large parties - please enquire with the owner.

Group Booking Details:
Please note - Ceridwen sleeps 19 people. The owner has 8 properties which, when booked together, can accommodate up to 60 guests.
Dining capacity - Up to 24.
Pricing - Contact owner for group prices.
All male groups - Please enquire with owner.
All female groups - Please enquire with owner.
Catering available - Yes (by arrangement).

Booking Conditions:
Please refer to the owner for accessibility requirements, booking terms / conditions and cancellation policy.
Help combat online fraud. Speak to the owner on our officially verified number: +44(0)1559 370517 before paying by bank transfer.
Please discuss any requirements regarding your pet(s) with the property owner.
Independent Cottages recommends that you take out holiday cancellation insurance.